Old Ironsides Is Made of Wood? 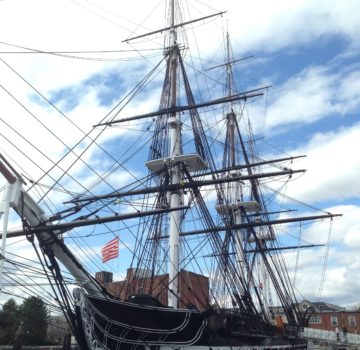 Batten the hatches! Roll out the cannon! Swab, load, fire! The sailors on the USS Constitution, a.k.a. Old Ironsides, could shoot at roughly twice the rate of her British counterparts. Combined with the strongest hull technology of the day, this ship-of-the-line rightfully earned its heroic reputation with a cumulative 33-0 battle record.

While the British were building and equipping hundreds of military vessels, the United States commissioned its first six frigates in 1794. The Constitution and her five sister ships were designed with quality in mind. Super-strong southern live oak was used in the wood in the hull and framing. This heavy timber has a density of 75 pounds per cubic foot, making it heavier than water, heavier than most other common timbers. The huge internal braces of the ship were cut in solid pieces from individual trees, as opposed to being compositely joined on site. The result was a hard body that appeared to deflect cannon balls like iron.

Although the ship’s construction is typically credited for its victories, critics contend that the crew is mostly responsible for the successes. With so few boats to equip, the US Navy had plenty of live ammunition to practice with. In contrast, British Captains were forced to be stingy with using resources live fire practice. The American’s proved the adage that practice makes perfect and increased their rate of fire dramatically over the competition. Captain Isaac Hull of the Constitution is also credited with outmaneuvering his British counterpart, Captain James Dacres.

Despite thwarting the British attacks of 1812, it would still be over a century before the US could claim naval superiority. Throughout that time, the USS constitution continued to sail and represent the US Navy. Today it remains a commissioned warship. Visitors to the USS Constitution Museum in Charlestown, MA have the opportunity to walk the historic main deck and gun deck. The enlisted docents do a fantastic job of explaining the construction of the ship, its historic missions, and life at sea in the era of tall ships.