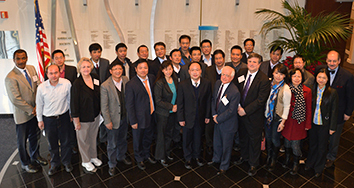 Eager to learn about water resources management in this country and the role that ASCE plays in this respect, 22 officials from China’s Ministry of Water Resources visited ASCE’s headquarters, in Reston, Virginia, for a daylong meeting on December 6. Amy Basley

A delegation of 22 high-ranking officials from China’s Ministry of Water Resources visited ASCE’s headquarters, in Reston, Virginia, on December 6 to gain a better understanding of U.S. policies and practices and to offer information about water strategies in their country. The visitors were particularly interested in water resources policy and management and in how policy is implemented at the local, state, and federal levels. They also wanted to obtain a clearer picture of ASCE’s role in these matters.

“We would like to learn from the experience that the U.S. has in water management, especially in making policies,” said Qiyang Yu, the deputy director general of the water resources department within the Ministry of Water Resources and the head of the delegation. “We also wanted to learn what some of the problems are that the U.S. is facing in regard to water resources and how you try to solve them.”

“My impression of the value of this meeting is that I believe that both we and the Chinese will see value beyond simply sharing information by having this roundtable discussion,” added Durrant. “My hope is that we continue to interface and develop relationships between ASCE and the Ministry of Water Resources in China that will allow this kind of dialogue to continue.”

Delli Priscoli began the meeting with a PowerPoint presentation entitled “Water Resources in the U.S.: Perspectives and Challenges,” which surveyed the history of water policy in the United States, discussed the early role of engineers, chronicled the development of water policy before and after the Clean Water Act, and summarized various water treaties the United States has signed with Canada and Mexico.

“Where U.S. history is hundreds of years old, Chinese history is thousands of years old, but there are some similarities in the water issues that we both are facing,” said Delli Priscoli. “They were very interested in the evolution of our [water] policies and were extremely interested in our era of large [water] investment [in U.S. history] because China today is doing massive amounts of water-related project construction. They wanted to know a lot about the [water] transition periods that have occurred in this country and about our aging infrastructure and how we are addressing that issue. I believe that they essentially see themselves as replumbing a continent, and they see us as having done the same thing when we built this nation, so they are eager to have many exchanges with the U.S. This group had a lot of questions, they interacted very well, and they grasped a lot of context from us very quickly. So I think this meeting was a great success.”

Shilling gave the delegation an overview of the role played by ASCE and the EWRI in formulating water policy, and he provided the visitors with a number of ASCE publications that may prove useful in dealing with water sharing and water quality issues in connection with transborder water resources. The publications included Guideline for Development of Effective Water Sharing Agreements (2012), the standard Comprehensive Transboundary Water Quality Management Agreement (2009), Role of Technology in Water Resources Planning and Management (2009), and the paper “Evolution of Institutional Structure for Water Resources Planning,” which was published in Environmental and Water Resources History (2003).

“Some of the ideas we heard will be very useful,” observed Yu. “It does not matter if it is in the U.S. or in China because water resources are the same; we face some of the same problems. So it will be very helpful to bring some of the water solutions we heard today back to China and then to think about how to integrate that into what we do.”

Delli Priscoli was eager to impart information but pointed out that much can be learned from studying China’s policies and practices as they relate to water resources.

“In certain ways, the Chinese are doing things that we in this country have not even dreamed about. They are doing many innovative and many large-scale [water] projects that have both positive and negative effects that we can learn a lot from,” said Delli Priscoli. “China is engaged in one of the largest and most ambitious water resources projects in the world, the South–North Water Transfer Project [to convey water from the Yangtze (Chang Jiang) River in the south to the Huang (Yellow) and Hai (Bai) rivers in the north].

“We have similar challenges in the U.S., where we have areas that are quite arid and then other areas where there is water everywhere. [Up to this point], we’ve not considered this notion of the interbasin transfer of water [as in the South–North Water Transfer Project], but I would imagine that if the Chinese are successful, it could be something that the world could learn from; it is extraordinarily ambitious.”

The visitors and hosts concluded their meeting by expressing the hope that they would meet again to exchange ideas in the future.