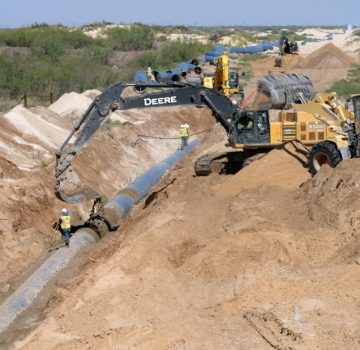 This is the fifth of a series about the five finalists for ASCE’s Outstanding Civil Engineering Achievement (OCEA) awards. Established in 1960, the OCEA Award recognizes a project that makes a significant contribution to both the civil engineering profession and society as a whole. The winner of this year’s OCEA award will be announced at ASCE’s Outstanding Projects And Leaders (OPAL) Gala, March 26, at the Renaissance Arlington Capital View Hotel in Arlington, Virginia. Today, read about the Ward County Water Supply Project.

According to the National Climatic Data Center, 2011 was the driest and second-hottest year on record in West Texas since the center started tracking weather 117 years ago. Soaring temperatures and lack of rainfall contributed to high evaporation, dry soil conditions, and minimal runoff for supply reservoirs. In fact, the Colorado River Municipal Water District (CRMWD) saw its 3 reservoirs drop to a combined storage volume of 5.5% of capacity, forcing its approximately 500,000 customers – including Odessa and Midland, Texas – to ration water. CRMWD estimated the reservoirs would be completely dry by February 2013.

Given the area’s unprecedented combination of record drought and dramatic population growth, the timely implementation of a new water supply system was critical. In June 2011, CRMWD authorized 2 civil engineering firms to begin the Ward County Water Supply Project: Daniel B. Stephens & Associates, Inc., to develop the well field expansion to generate an additional 15 MGD (million-gallons-per-day), and Freese and Nichols, Inc., to design and oversee the construction of the well collection and water transmission system. The deadline for full operation was January 1, 2013.

The complex project involved design and construction of 21 groundwater wells, 65 miles of pipeline, and 4 booster pump stations. Designed and constructed in less than 18 months – two weeks ahead of schedule – the $100 million project, which was delivered $25 million under budget, encountered and overcame many engineering challenges. Among them were producing water from an aquifer with highly variable water quality, installing pipelines through several miles of shifting sand dunes, dealing with labor and housing shortages related to the oil and gas boom in West Texas, obtaining environmental permitting, and acquiring easements.

Wrote the OCEA jurors, “A project that was budgeted at $125 million came in under budget at $100 million. This project provides additional drinking water to one of the fastest-growing metropolitan areas of the U.S. This growth is the result of the increase in fuel lines in this Texas area. [This] project links economic development with natural resources, i.e., water. [The] scale of the project along with environmental tradeoffs [are] noteworthy.”