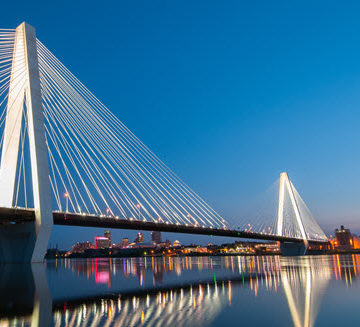 When a new bridge connects two different states, building a sense of community and ownership around the project is about as important as the engineering details themselves.

The Stan Musial Veterans Memorial Bridge has achieved it all. The four-lane, cable-stayed bridge spans the Mississippi River to connect St. Louis, MO, and St. Clair County, IL, and is one of six projects to be honored as finalists for the 2016 ASCE Outstanding Civil Engineering Achievement Award.

“It was a great day when the project was opened up,” said Randy Hitt, P.E., the project director and a construction and materials liaison engineer for the Missouri Department of Transportation.

“We hit all our marks. We hit our traffic counts. Everyone’s saying, ‘Hey, it saved so much time off of my commute.’”

The bridge significantly alleviated traffic tieups by diverting one of three interstate crossings from the nearby Poplar Street Bridge.

The community-building and teamwork extended to the earliest discussions about the project back in 1990. The Missouri and Illinois departments of transportation eventually decided to break the project down into two major phases due to available funding. The first phase, completed in February 2014, was divided into 37 smaller, individual projects to mitigate budget concerns while still meeting existing transportation needs.

It is the first megaproject of its kind to be constructed in phases.

“We [MoDOT and IDOT] met weekly to review our goals,” Hitt said. “We reviewed all the individual projects that weren’t jointly funded, to go over their progress. We had a Federal Highway [Administration] representative assigned full-time who was instrumental in helping us navigate through some of the red tape.

“We really fully integrated our efforts, and that was key to getting this finished on time and below budget.”

To further the community’s sense of ownership, the project team conducted public tours of the site the last Friday of each month. More than 2,000 people toured the bridge.

“People are fascinated by how big projects like this are constructed, so this educated the public on the need for infrastructure,” Hitt said. “People going through the tour always marvel, ‘Wow, I didn’t realize it was so complex. It just looks so simple and beautiful out there.’

“And that’s one of the great successes when you can make something that’s so complex look so natural and beautiful,” the project director said. “Cable-stay is just kind of a naturally aesthetically pleasing structure. With the lights and the simple things we did, painting the towers, it really adds to the skyline.”

“They’ll have different pictures of the downtown area, and they’ll always show it in the background,” Hitt said. “When you see that, you know it has had an impact on the city and the region.”

Read more about the Stan Musial Veterans Memorial Bridge at the ASCE Library.