Rajan Jha makes it sound simple – “Find your passion and do something about it.”

For being among the very best at applying their passions to their chosen profession, Jha and fellow ASCE member Steven Mezzacappa have been honored by DiscoverE as the civil engineering representatives among its 2016 New Faces of Engineering.

“It’s totally unbelievable, to be honest,” said Jha, EIT, A.M.ASCE, a project engineer specializing in water resources for ARCADIS in Richmond, VA.
“All of the New Faces are outstanding. Everybody’s done something that’s inspiring.” 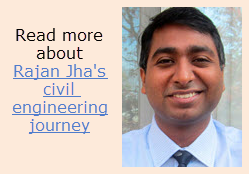 Jha grew up in India and came to the United States in 2011 to pursue his master’s degree at Virginia Tech. It wasn’t long before he got involved in ASCE activities. He currently serves as the first vice president of the Virginia Section and heads the website newsletter and the scholarship committee.

In 2014 he founded the Richmond Branch of Environmental and Water Resources Group and started with an initiative called Water Allies. He’s also worked extensively with Engineers Without Borders, serving as the co-chair of the Central Virginia Chapter and also as a planning, monitoring, and design lead for a water-supply project in Zambia.

Jha celebrated the New Faces honor with his family, both in India and the U.S. “Of course my family was on cloud 10, not even cloud nine,” Jha laughed. “It means a lot to them.”

Jha said he has received messages from people around the world congratulating him and crediting him for helping to inspire them.

“The New Faces recognition has changed my life,” Jha said. “It enlivens you and changes you. I’ve started believing more in my approach. I have started expecting more from myself in my performance. I know I’m going in the right direction.”

Mezzacappa, S.M.ASCE, is wrapping up his junior year studying architectural engineering at Penn State University. He is the campus king of extracurricular leadership.

“It’s a huge honor to be named a New Face of Engineering,” Mezzacappa said. “It represents a lot of the other things I’ve been involved in.” 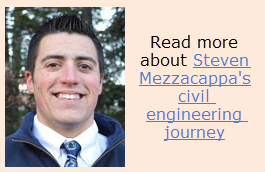 “I first met her when I was a freshman,” Mezzacappa said. “She’s someone I’ve really looked up to in so many ways. To follow in her footsteps is nothing I could imagine.”

Mezzacappa has been involved in many activities at Penn State, including the Concrete Canoe team, Bridges to Prosperity, Engineers Without Borders USA, and the Council of Lionhearts. As president of the Bridges to Prosperity chapter, Mezzacappa oversaw the construction of a 30-meter pedestrian bridge in Panama last year.

“Extracurriculars aren’t just something that happen in high school or college; it’s something you can carry on into your professional career,” Mezzacappa said. “It’s not just about having a job or making money. It’s about having an impact in the world.”