Traveling through the French countryside, I was at first impressed by the all 800-year-old edifices that I encountered. Six months later, and a hundred old churches later, my expectations for a historic structure changed drastically.  It is amazing that any churches and castles have survived for centuries, but what makes one church worth preserving while another crumbles.

Challenges to a structures longevity come in many forms.  The elements of wind and water easily come to mind.  However, political upheavals like the French Revolutions, for example, can leave important buildings defaced or worse.  Most buildings simply outlive their useful live and are abandoned or torn down in favor of the latest architectural trend.  How do residents decide which buildings are worth preserving.

While many villages in Southern France can lay claim to a 12th century abbey, the condition of these structures varies greatly.  The abbeys of St. Etienne des Sorts and Venéjan are case studies for this difference. Both churches are perched on the highest points overlooking the villages. However, the abbey of St. Etienne is crumbling into a pile of rock. It’s even sadder to see that kids have painted graffiti on the remaining stone walls.  Meanwhile, in Venéjan, the ancient church stands proudly at the apex of a well planned hillside park that even features an open-air amphitheater and a historic windmill.

The fact that Venéjan’s church still has four walls and lockable doors signifies a victory over time, but this it holds an even more impressive treasure inside.  Recent renovations have uncovered original murals dating back to the earliest days of the church.  They are faint and not easy to capture with a point-and-click camera but impressive nevertheless.  In this case, the preservation was accidental – hidden below “protective” layers of plaster.  Even so, the church must have served its congretation well.  We’re now fortunate to witness the treasure retained from that long effort of preservation. 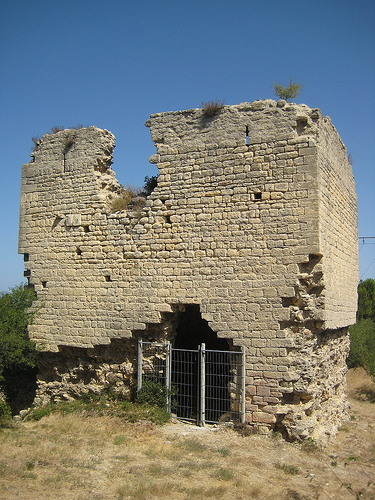