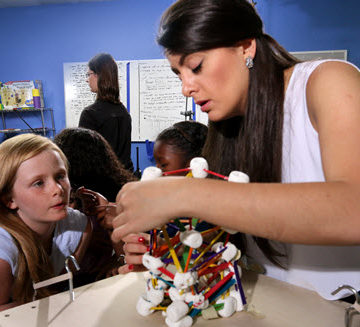 Visitors to the Carnegie Science Center in Pittsburgh won’t have to look far for an example of Dream Big engineering in 2017.

Carnegie began construction this week that will culminate in a new four-story science pavilion. The project aligns nicely with the debut of Dream Big: Engineering Our World. The giant-screen film, presented by Bechtel and produced by MacGillivray Freeman Films in partnership with ASCE, premieres Feb. 17 at Carnegie museums and theaters around the world.

“We hope to have a peephole so kids can watch the construction,” laughed Susan Zimecki, director of marketing and community affairs for Carnegie Science Center.

Carnegie Science Center is among more than 50 museums and theaters excited to screen Dream Big.

“We have really done something big with Dream Big — and that is getting an emotional story told about being an engineer,” said the film’s director Greg MacGillivray.

“The largest museums in the world saw the film and were moved by its story, and they are now committed to our goal of telling people about the excitement of being an engineer.”

In San Diego, the Reuben H. Fleet Science Center has moved its Dream Big opening from November 2017 up to March after the film has generated so much buzz among the local engineering community.

ASCE has developed a variety of lesson plans, educational videos, and activities to help engage students so they bring the film back to the classroom. Many of the museums are doing the same, pairing Dream Big with their own events and programs.

Carnegie Science Center hosts an Engineer the Future weekend every year as part of Engineers Week. More than 40 local corporations and universities staff hands-on activity tables with engineering professionals to get students excited about engineering. This year, the Dream Big release ties in with the event.

“Students will talk to engineers and ask questions – What did you major in? What do you like best about your job? – to get a real feel for their profession,” Zimecki said. “Engineering is just a word, to a great extent. Students don’t really know: What do engineers really do?

“I think one of the wonderful things about Dream Big is it makes that very clear in an exciting, visual way.”