More Than Meets the Eye

It was just another ordinary work day until… kaboom!  We heard a loud explosion outside.  Everyone in the office rushed to the windows.  A 10-story tall fireball engulfed Wacker drive.  The “national guard” fired at some unseen threat.  It all lasted about 30 seconds. 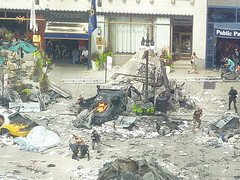 I returned to my desk.  That was the best action sequence yet.   The filming of Transformers 3 was really killing my productivity.  Every half hour or so, a new round of machine-gun fire and pyrotechnics announced that the cameras were rolling.  I was most anxious to see the base jumpers that would drop off of Trump Tower, just across the street.

Throughout the summer, Chicago felt a little bit like Hollywood.  There were Shia Labeouf siteings in local restraunts and giant wheeled piles of faux debris on the street.  I was pretty cool to see movie magic being made… well, maybe for the first week.  After long, the constant street closures and loud explosions become a nuisance.  It was interesting attempting to explain the sounds of machine gun fire to clients calling in from other cities. From the perspective of a civil engineer, it was interesting to not the prominence that the city played in the apparent action sequences.  It’s clear that the bridges and buildings along the Chicago River will central to the action.  Perhaps it’s time for a new CE t-shirt. “Civil Engineers: designing the world’s best movie sets.”