Please forgive me for the long and unannounced break since my last post. Over the past month I have been exceptionally busy traveling for work, pleasure, and to attend the ASCE annual conference in Montreal. The time off has provided substantial inspiration for blog topics. Stay tuned for regular postings in the weeks to come.

This year the conference theme was “Civil Engineering in the New Global Economy.” The program was apropos for the international setting. Our neighbor to the North is actually America’s number one trading partner, accounting for over 16% of our total trade (US Census Bureau). At the same time, relations are so smooth, that for years while growing up in Michigan, I though Canada was just another State. Before September 11, a library card was practically the only ID necessary to cross the bridge into Windsor. While those days are long gone, it was still relatively painless to travel from Chicago to Montreal. A quick shout-out to Porter Airlines is in order for providing one of the most pleasant flights in memory. 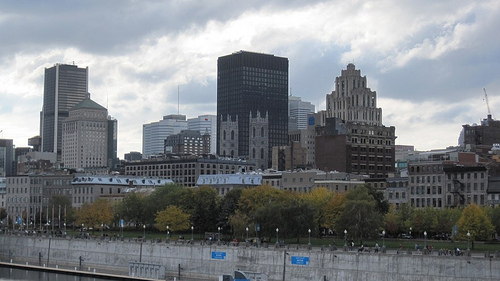 The French Canadian culture and language is part of the charm of visiting Montreal. During my stay, I had many opportunities to practice my French. Often that elicited a response in English. Non-Francophiles have nothing to fear. I also enjoyed some traditional French cuisine and browsed the European styles featured in the department stores. Some of the coolest fashions are sold at Simons. Figuring that the Quebecois would know something about keeping warm, I purchased a new winter coat.

I also had a blast at night with other younger members at the conference. Featuring several universities, strong economic growth, and lots of bars, Montreal seems like one of the youngest cities I’ve visited. There’s lots of nightlife on Boulevard Saint-Laurent and Rue Crescent in particular. We ended up putting on a good show for the locals at one of the karaoke bars in town. But I digress… I was in Montreal to attend an engineering conference. Sessions focused on leadership in the international market. The Committee on Younger Members did a particularly good job gathering speakers like Andres Torres (Valmont Industries) and Eli Gottlieb (Thornton Tomasetti) in a session titled “Competence Redefined in a Global Workplace.” There were also a number of sessions that addressed the specific infrastructure needs and accomplishments of the St. Lawrence Seaway. Another reason for the conference is the leadership handoff on the ASCE executive board and between incoming and outgoing presidents.

The whole week was a lot of fun. I learned some new things and made many new friends. Over the next couple of posts, I’ll delve a little deeper into my Annual Conference 2012 experience.