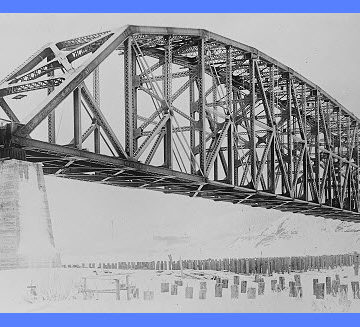 The Mears Memorial Bridge in Alaska.

January marked the anniversary of the birth of Ralph Modjeski, Polish-born American civil engineer, best known for his distinguished work that spanned two eras of bridge engineering and construction.

Modjeski’s superlatives include many early reinforced concrete bridges, notable long-span simple trusses, the longest swing span, the longest cantilever bridge, and the longest suspension bridge (twice). He was a past director of the American Society of Civil Engineers, and in 1903 was named Engineer of the Year by the Society.

Rudolf Modrzejewski was born to Gustav Sinnmayer Modrzejewski and Helena Opid Modrzejewska, Jan. 27, 1861, in Bochnia, Poland, which at the time was under the auspices of the Austrian Empire. Rudolf’s mother was a well-known actress who made her stage debut the same year Rudolf was born. In 1868, having left Rudolf’s father, Helena married a Polish nobleman, Karol Bożenta Chłapowski.

In 1876, after spending more than a decade as the reigning diva of the Polish national theater, Helena emigrated with her husband to the United States to start a communal farm in California. The farm failed, and Helena returned to the stage in 1877, becoming a star of the American theater. It was during this time that she simplified her name to Helena Modjeska and Rudolf’s name to Ralph Modjeski.

In 1881, Ralph went to Paris and entered the Ecole Nationale des Ponts et Chaussees, the world’s first formal civil engineering school. In 1885, he graduated in the top of his class with a degree in civil engineering and returned to America where he apprenticed for seven years under George Morison, the leading bridge builder of his day.

Modjeski’s first work under Morison was as assistant engineer for the construction of the Union Pacific Bridge over the Missouri River in Omaha, NE. In 1887, Modjeski became an American citizen. From 1889 to 1892, Modjeski drafted, designed, and served as a construction inspector and assistant engineer for the Frisco Bridge, a cantilever-through-truss bridge across the Mississippi River in Memphis, TN.

In 1893, Modjeski opened an independent practice in Chicago where his first engagement was to design the Government (Arsenal) Bridge, a railway and highway bridge over the Mississippi River at Rock Island, IL. Over the next three decades, Modjeski led the design and construction of numerous truss bridges, including the Thebes (1905), McKinley (1910), and Harahan (1916) bridges over the Mississippi River, three Burlington Northern Railroad bridges in Oregon (1906-1908), and the Mears Memorial Bridge (1923) in central Alaska.

By 1907, Modjeski’s reputation was such that he was named to the commission charged with analyzing the collapse of the Quebec Bridge over the St. Lawrence River. After the analysis was completed, Modjeski took on the job of creating a new cantilever design to replace the Quebec Bridge and supervising the reconstruction of what became the longest truss span in the world.

The Mid-Hudson Bridge in Poughkeepsie, NY.

In 1909, Modjeski was engaged by the City of New York as a consulting engineer to report on design and construction of the Manhattan Bridge over the East River, the forerunner of modern suspension bridges. In 1921, Modjeski was chief engineer for the Delaware River Bridge (Benjamin Franklin Bridge), a steel suspension bridge linking Philadelphia to Camden, NJ. At its construction in 1926, it was the longest single span of any suspension bridge in the world. However, in 1929, this record was surpassed by Detroit’s Ambassador Bridge, on which Modjeski served as consulting engineer.

In total Modjeski led or directly influenced the design and construction of nearly 40 bridges spanning America’s great rivers. Many of his structures are recognized as National Historic Civil Engineering Landmarks. Trained by one of the fathers of American bridge engineering, he in turn trained the next generation of bridge engineers, leaving a lasting legacy of accomplishment and technological achievement.

Ralph Modjeski died June 26, 1940, in Los Angeles, hailed by the New York Times as “the world’s leading bridge builder.” He is interred at Inglewood Park Cemetery in Inglewood, CA.