Last weekend I volunteered (and the partook in) the Oak Park Micro Brew Review. Sixty brewers shared samples of their finest fermented fluids. The outdoor event shut down a half mile of village streets and welcomed over 3,500 patrons. If everyone sampled just 25% of the brew allotted per their vouchers then approximately 700 gallons of beer and cider would have been been consumed. Despite the volume consumed, fair organizers boasted that the event could be zero waste! Let’s assume they left the portable toilets out of the equation. 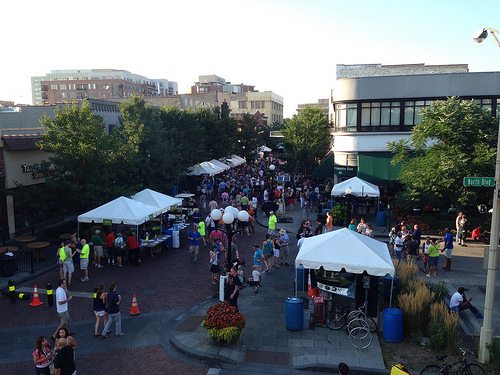 My volunteer responsibilities mostly centered around helping the most inebriated connoisseurs sort their recyclables correctly. The event partnered with Whole Foods to supply compostable plates, napkins, and utensils. The spoons looked a little quirky, as they were ingeniously folded card stock.

My “resource recovery” station included bins for compost, recycling, landfill, and flushable liquids. All of the disposables provided by the fair were either compostable or recyclable. Only items brought from outside should have made it into the bins marked “landfill.” The grossest assignment was to dump down the sewer the liquid bucket, mostly filled with a bubbling brew of unwanted samples. All of this was made possible by Seven Generations Ahead, an organization facilitating sustainable community development. Among their initiatives is promotion of Zero Waste. The Zero Waste International Alliance (ZWIA) defines the concept thus, “Zero Waste is a goal that is ethical, economical, efficient and visionary, to guide people in changing the lifestyles and practices to emulate sustainable natural cycles, where all discarded materials are designed to become resources for others to use.” So basically – stop throwing stuff in the trash.

Achieving Zero Waste involves four concepts: source reduction, recycling, composting and liquid diversion. Though I’d heard these for years, I was still surprised to learn how many paper products, like napkins and plates, could be composted. (I didn’t know that was compostable?) It also had never occurred to me that liquids could be contributing to landfill waste. Part of the re-education that ZWIA promotes is the rebranding of the term garbage to landfill. Garbage implies a mix of everything hidden in a large black can. Zero Waste compels people to think of what is in that can that could be diverted from the landfill.