A few weekends ago I visited Meadow Brook mansion in Rochester, Michigan. The massive manor was built between 1926 and 1929 for Matilda Dodge Wilson and her family. Mrs. Wilson, heiress to the John Dodge fortune, brought both her second husband and an architect on her honeymoon. While in Europe, they explored many manor houses and conceived of an expansive Tudor revival mansion. 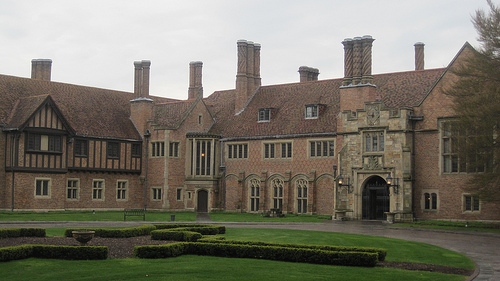 The Wilsons and their architect faithfully recreated a country estate in the traditional Tudor style. Although the Tudor revival of the 20th century first emphasized the simplicity of English country homes, it soon became popular among the upper class. In addition to exposed beams, herringbone brickwork, pitched roofs and other characteristic architecture, patrons like Matilda Wilson included wildly elaborate chimneys, gothic arches, and exotic furnishings.

Although the final building would have seemed at home in the English countryside, the Wilson’s insisted that all of the building materials be sourced locally. Unlike many of the neo-gothic buildings on college campuses, Meadow Brook was authentically American, like the rise of the Wilsons. Mrs. Wilson, however, was born in Canada. She met John Dodge while working as his secretary. Shortly thereafter she married the man almost two decades her senior. John Dodge, whose moniker still graces a make of Chrysler vehicles, made his fortune first as supplier to and then investor in Ford Motor Company. Mr. Wilson meanwhile did well as a lumber trader but didn’t hit the high life until he met widowed Matilda Dodge.

Money can buy a remarkable estate, luxurious trips around the globe, and the world’s best horses, but it cannot stave off tragedy. Matilda Dodge Wilson lost both her first husband and 5-year-old child less than one year apart. Later, her only son died in a dynamite accident just a year after getting married. One of Mrs. Wilson’s biological children survived, and the Wilson’s adopted two other children. Her legacy also continues through the endowment of Oakland University and public use of Meadow Brook.