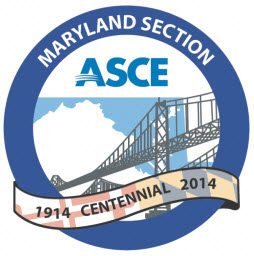 On July 4, 1828, Charles Carroll of Carrollton, Maryland, laid the cornerstone for the Baltimore & Ohio (B&O) Railroad, starting construction on an important rail line that would ultimately reach the Mississippi River. On the very same day, John Quincy Adams attended the groundbreaking for the Chesapeake and Ohio Canal, just outside of Georgetown, in Washington, D.C., another important and competing civil engineering transportation initiative to open the western frontier.

An engineering feat of no lesser greatness is the Chesapeake Bay Bridge, which connects the Eastern Shore of Maryland with the Western Shore. When it opened in 1952, the 4.3-mile bridge was the world’s longest continuous over-water steel structure.

Acknowledging the work of the civil engineering profession and the ASCE Maryland Section, which is celebrating its 100th anniversary, Governor Martin O’Malley has signed a Governor’s Citation to the Section. It reads, “[t]hat on behalf of the citizens of this State, in recognition of a well-deserved tribute to applaud the 100th anniversary of your distinguished section…in honor of the growth and success that has been achieved by your members during the past 100 years, and as our citizens join in expressing our congratulations and sincere best wishes for a memorable celebration, we are pleased to confer upon you this Governor’s Citation.”

Baltimore Mayor Stephanie Rawlings-Blake was no less appreciative when she signed a Proclamation “proclaiming June 6, 2014, as Maryland Section of the American Society of Civil Engineers Day in Baltimore, in celebration of their 100th anniversary in Baltimore.”

“We wanted civil engineers to be proud of everything that we have done in Maryland and [to realize] why it is great to be a Maryland civil engineer,” explained Joel K. Oppenheimer, P.E., CP, M.ASCE, chair of the 100th Anniversary Committee. “And we wanted our year-long anniversary celebration and gala to be an inspiration for younger engineers to sit there and say, ‘Wow, look what the ASCE Maryland Section has done the last 100 years and look at what is going to happen in the next 100 years!’ It gave us a chance to recognize our people, our past history, and the projects that we have left behind.”

“I was very impressed with the breadth and depth of the Maryland Section anniversary events, including the extensive programs and activities they have initiated, the gala, and their excellent progress in advancing ASCE’s mission and goals in the State of Maryland,” says Smith, who will be ASCE’s next executive director, effective January 1, 2015.

The Maryland Section kicked off their anniversary celebration with a family barbeque in August 2013. Then, beginning in September 2013, each of the monthly Section meetings was highlighted by presenting another piece of history, culminating with the anniversary gala in June.

“At the October meeting, I gave a presentation illustrating the history of the Maryland Section and how it was first born out of national ASCE in 1914,” recalled Oppenheimer, who served as president of the Section in 2001-2002. “One of the highlights of the presentation was a photo that came from a local newspaper of one of our early meetings back in 1915. It showed Section members about to have dinner with tablecloths, silverware, and fine china but sitting in a water diversion tunnel that was about to be opened. That got a few chuckles.”

Other topics for the monthly presentations took in the B&O Railroad, the history of transportation in the state, and the state’s bridges, including the Bay Bridge.

An anniversary banner was displayed in downtown Baltimore from late May to mid-August. Photo Credit: Maryland Section

In March, the Section held a dinner meeting at the B&O Railroad Museum in downtown Baltimore, which included a special tour of the museum.

“Since we already had a speaker come and talk to us about the history of the B&O Railroad system, this gave us a chance to really see all the trains and museum pieces up close,” says Oppenheimer. “The railroad museum was a fun event.”

During the build-up to the gala, Oppenheimer says the Section had a logo contest and then used the design on lapel pins that were given away at meetings and other events. The logo design was also used on a giant 12 x 6-foot banner that was displayed from late May to mid-August on the side of Rummel, Klepper & Kahl’s building in downtown Baltimore, visible from the southbound Jones Falls Expressway.

The climax of the Section’s celebration was the gala, which came exactly 100 years and 1 month to the day after the Maryland Section was originally chartered on May 6, 1914. The Section raised approximately $34,000 for the gala, which featured a cocktail hour, dinner, and dancing afterwards.

“As part of the festivities, we recognized all of our life members who were there, the oldest being 92 years old,” says Oppenheimer, who serves as senior vice-president for STV Incorporated. “We then introduced all of our former Section presidents who were in the room. They came up to the front of the room and had their photo taken together.”

Joel K. Oppenheimer, chair of the Anniversary Committee, offers a 100th anniversary toast to the 275 people in attendance at the gala. Photo Credit: Maryland Section

He said, “When we formed the Section in 1914 we were only 58 members and today we are 2,200 members. That very same year, Baltimore hosted the 46th annual conference of ASCE, and tonight we are celebrating the founding [of] 100 years ago: our past, our projects, and our people. The past 100 years were very nice but for you younger engineers, you are going to be blazing the trail for the next 100 years.”

The Maryland Section is presently putting the final touches on a commemorative book .

“We modeled it after the book the Georgia Section produced in 2012,” notes Oppenheimer. “The theme of the book is our past, our projects, and our people. The People section will have interviews with our former presidents and we asked them to talk about their fondest memories of when they were president. Obviously, we will have the list of all the past presidents and have a lot of photos of all the engineering projects that [have] happened in Maryland throughout the years, decade by decade.”

Oppenheimer says they are also creating a time capsule that will either be free-standing or built into a wall at the Engineers Club at the historic Garrett-Jacobs Mansion, in downtown Baltimore.

“The time capsule will be opened on the 200th anniversary of the Maryland Section,” he says. “It will include our commemorative book and lots of things I got postmarked from May 6, 2014, including the Baltimore Sun newspaper, Engineering News-Record magazine, and a whole bunch of other things that were time sensitive.

“We are also going to put in a DVD of the best movie of the year, and of course, a DVD player and batteries because you don’t know what energy source they are going to have in 100 years.”

As part of the year-long celebration, this past fall and spring the Section took part in what they called a Civil Works Community Service Day. At the Clifton Valve Park House in Baltimore, members worked on a farm community that grows vegetables.

“We were helping grow food for the community,” says Oppenheimer. “We were digging ditches to help irrigate or take the drainage away from the areas where it floods a little bit.

“We were very proud to say that we were civil engineers in Maryland for the past 100 years, and we’ve contributed a lot to society over the 100 years.”