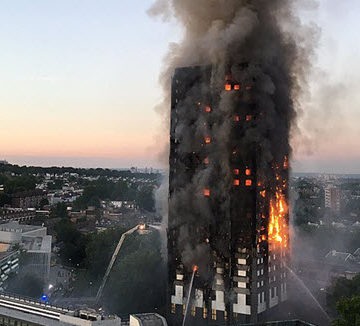 The Grenfell Tower Fire of 2017 in London has caused a renewed focus on buildings safety in England.

In the early morning of June 14, 2017, a simple kitchen fire spread quickly across the Grenfell Tower, a 24-story residential building in West London, consuming the structure and killing 71 people.

The tragedy sent shockwaves throughout the construction industry not just in England but around the world.

“It’s certainly been a wakeup call,” said Alastair Soane, Ph.D., C.Eng, director of Structural Safety UK. “Some of the issues that have been highlighted have of course been recognized by those of us in the safety industry for some years. But it takes a tragedy for these things to be more widely acknowledged. It’s taken a tragedy to call attention to some of the safety work that we and others do.”

While the government’s inquiry into the construction issues specific to the Grenfell Tower continues, a published report helmed by Dame Judith Hackitt, “Independent Review of Building Regulations and Fire Safety,” sounded an alarm about the entire system of how buildings are designed, constructed, operated, and regulated in the United Kingdom.

The Hackitt Report describes a UK system of high-rise and complex buildings in need of clarity. The recommendations include the need for a stronger regulatory framework, a responsive system in place to give voice to residents’ concerns, and more clearly defined safety roles and responsibilities.

Soane was a contributor to the Hackitt Report and recently participated in a roundtable discussion about the fire at ASCE’s 2019 Structures Congress.

“One of the recommendations that have come out is that there should be a golden thread that connects all of the information from the client through the designers through the regulators through the contractors and ultimately to the residents of buildings,” Soane said. “So that information flows through all those parties on a continuous and recorded basis.”

Information flow has been a passion of Soane’s for more than a decade. He worked to establish CROSS – Confidential Reporting On Structural Safety – a system of safety reporting designed to collect and share lessons learned. It won’t save the lives lost in the Grenfell Tower tragedy, but it just might prevent the next disaster.

“Often when there is a disaster, people ask, ‘Why wasn’t this highlighted before? Why didn’t we know this was happening?’” Soane said.

“So, in Structural-Safety, we look for precursors.  We collect information particularly from confidential reports, and then process it in order to let people know in the industry that there are issues, without blaming anybody. We think it’s helping to improve safety. That’s what we do.”

1. Consider risks of both known and unforeseen events

The unknown unknowns are crucial to assessing where the next potential risk will come from.

2. Consider the risks of unexpected consequences

A bolt might fail on a component, and there is little damage and nothing much happens. But if it fails on a tower crane, and the crane falls on a live railway, the consequences are enormous.

New materials, new forms of construction, emerging technologies are good, but a reflective-thinking engineer will look and decide if those changes have risks and whether those risks have been properly managed.

4. Release safety-critical information that could help others

If you know something that will help your colleagues, then there are mechanisms for letting people know.