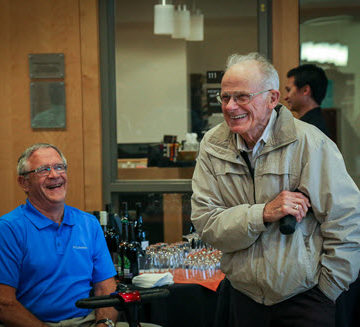 Ken Archibald walks into a surprise party in his honor at Oregon State. PHOTO: Johanna Carson

As a practitioner adviser for the Oregon State University ASCE Student Chapter since 1976, Archibald has made the 45-minute drive from Salem, OR, south to Corvallis at least once a week for 40 years. Oregon State honored Archibald last month for his service.

“That’s just his attitude – to jump in,” said Tom Miller, P.E., M.ASCE, who has worked with Archibald as the Student Chapter faculty adviser for 20 years.

“He’s just very, very dedicated to the students and to our chapters and to our school. I can’t think of anybody who shows as much dedication as Ken.”

Back in the 1970s, Archibald was active in what was then known as the ASCE Willamette Branch (now the Oregon Capital Branch), working for the Oregon Department of Transportation, when he was recruited to help at his alma mater, Oregon State.

He wasn’t sure what to expect. But it was clear that he had a gift for connecting with the young engineers.

“It’s a mystery. I’m kind of shy meeting new people,” said Archibald, P.E., M.ASCE. “Basically I just went down and attended the meetings and talked to individual students. There was no magic secret that I had.”

Archibald’s humility notwithstanding, it’s been a remarkable run of 40 years forging personal relationships through professional assistance. 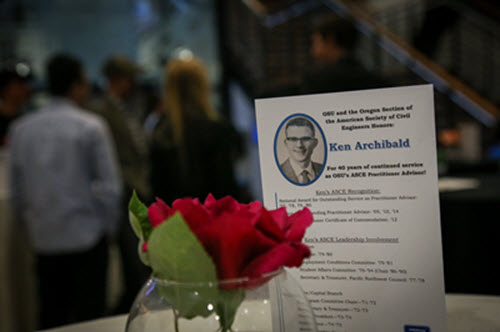 Ken Archibald has served as a practitioner adviser to the Oregon State Student Chapter for 40 years. PHOTO: Johanna Carson

“He tries to get to know each and every student as well as he can,” Miller said.

There’s the former student who was growing despondent about not finding a job after graduation. Archibald took it upon himself to suggest some available Capital Branch and Oregon Section employment resources. He encouraged him, helped keep his spirits up. Only weeks later, the student was hired with the help of a friend.

There’s the former Student Chapter president who moved to Florida and is still in touch with Archibald, regularly emailing him about graduate school and career plans.

There’s the student whose work on a project on civil engineering history so impressed Archibald that he helped bring it to the attention of ASCE national committees.

There’s the annual panel discussion that Archibald started, bringing practicing engineers from Oregon down to discuss industry trends and career advice with the Oregon State students.

“It’s one of the best meetings that we have each year,” Miller said.

Generosity runs in the Archibald family

In a sense, Archibald has been carrying on the legacy of his father, Raymond Archibald, a structural engineer who worked for the Federal Highway Administration and also graduated from Oregon State.

“I always admired my dad’s participation in professional organizations like ASCE,” said Archibald, whose father’s two brothers also studied civil engineering at Oregon State. “He just loved engineering. I think that just pushed me that way too.”

The Student Chapter honored Archibald with the title of practitioner adviser emeritus some years back, only to have be even more involved. They marked his 40th and final year with a surprise party. 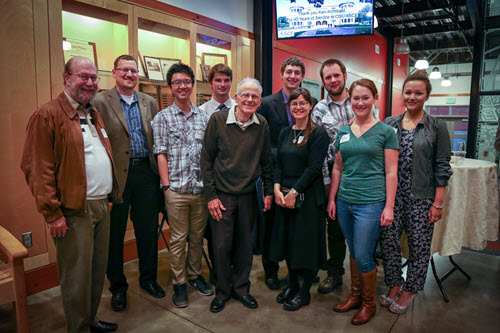 Archibald thought he was attending a friend’s lecture at the school, only to be greeted by Miller outside of Kearney Hall.

“I told him, ‘Hey Ken, the speaker had to cancel at the last minute, but come on in and we can talk for a few minutes anyway,’” Miller said.

Inside, a crowd that included Archibald’s wife, Jackie, their two daughters, and dozens of former students, advisers, alums, and local professionals cheered his arrival.

“When I walked in the door there and I saw all those people, I knew I was in trouble,” laughed Archibald. “It was really great.”

Even in his retirement, Archibald said he expects to continue attending Student Chapter events and helping students.

Not surprising from the 80-year-old who still participates in the touch football game at the Student Chapter officers retreat and has played in many of the annual softball games.

“You stay young that way, being around young people all the time,” Archibald said. “I’ve always been impressed with the talent of these kids. You can tell they’re born leaders.”

Learn more about how to volunteer to help a Student Chapter near you.