Learning to Listen: Seminar Connects the Design of Sustainable Projects with Community Involvement 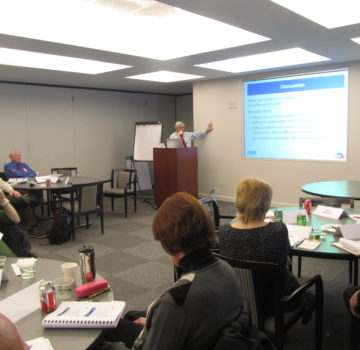 In the seven-hour ASCE seminar entitled, Community Participation: Effective Stakeholder, participates discovered through the examination of 3 real case studies, that community involvement and participation not only helped get the project approved and constructed, but also made it a more successful and more attractive project than its initial intension. Photo credit: Doug Scott

So explained Frank Blechman, a consultant/coach who served as the instructor for a unique seminar conducted by ASCE to help participants learn how to build a coalition of public support for the design, construction, operations, maintenance, and repurposing phases of major community engineering projects.

“[ASCE] has set a protocol whereby they expect civil engineers not just to be part of a team but to raise questions and be leaders on the subject of economic, environmental, and technical sustainability.”

“This course helps engineers think about community participation as it relates to an engineering project,” Blechman said.

A total of 30 civil engineers, architects, and city planners participated in the program ,entitled Community Participation: Effective Stakeholder Involvement Throughout the Project Lifecycle, on January 24. The seminar was filmed and will be offered as an ASCE continuing education course as part of its series on best practices in sustainable engineering.

As civil engineers integrate sustainability into the bridges, structures, highways, water systems, and electrical transmission lines they design, one key area is effective leadership through stakeholder involvement. According to the Institute of Sustainable Infrastructure, engineering skills are no longer enough to lead to successful sustainable infrastructure design; engineers now require the skill to maneuver through the public participation process. Participants discovered through the examination of 3 real case studies that community involvement and participation not only helped get the projects approved and constructed, but also made them more successful and more attractive than initially conceived.

If civil engineers are going to be asked to do these kinds of things, Blechman says they need the guidance, tools, and resources that this seminar provided.

“Initially, we talked about the skill of listening,” says Blechman, who from 1991 to 2002 was a member of the graduate faculty at the Institute for Conflict Analysis and Resolution at George Mason University. “Engineers are very good about presenting, but not trained in listening.  If people in the community don’t believe that engineers are listening to them, the interaction does not go very well.”

“The second key point we talked about is understanding the value of adding shared decision-making into your vocabulary; real interactive two-way communication as compared to one-way communication or show-and-tell. Because if you don’t build public support for the project, it may never get built; and if it does get build, it will never be sustainable because people in the community will undo it at some point in the future and not support its continued operations.”

Examining 3 case studies—the proposed 2001 Trans-Texas Corridor Transportation Network, the Syracuse (New York) Southside Sewage Treatment Plant, and Cincinnati’s [Ohio] I-75 Corridor Study—participants were given examples of a brilliantly designed project that was never built because of a lack of community participation, one built over community objection that may have contributed to the public officials getting voted out of office, and the third illustrating how allowing the general public to become familiar with the project not only created trust but also allowed for a more creative project.

“There are two key thoughts in terms of sustainability that civil engineers need to think about when they are designing a project and they both show up in the (ISI) Envision rating system,” says Richard N. Wright, Ph.D., P.E., NAE, Dist.M.ASCE, chair of ASCE’s Sustainable Infrastructure Education Committee and a participant in the seminar. “One is, you’ve got to do the right project that really meets the needs of the communities that are served and affected. And secondly, you have to do the project in the right way so that it is safe, functional,  economical, and not a great disturbance during the construction, operation, and maintenance of the facility.

The reason this community participation course is so important to civil engineers is that it shows them how to involve the key stakeholders in the community, [to] get their input and work with them to define what is the right project to meet their needs.”

Blechman says the lessons participants learned included that involving the community would make their work better and more successful, that sustainable engineering requires public understanding and support, and that an engineer’s future role includes educating the public.

“Remember,” said Blechman to the participants at the end of the seminar, “you represent all engineers when you interact with any community during the life of the project. Make the extra effort to ensure that your work builds sustainability and improves the reputation of engineers everywhere.”

“It was a fantastic seminar,” concluded Alex Rosenheim, P.E., LEED AP, M.ASCE, sustainability chair of ASCE’s National Capital Section. “The three case studies were really great in bringing out real situations and lessons learned – the good, the bad, and the very useful.

“Sometimes you are focused so much on the design aspects of a project, you forget there are people involved. [Frank Blechman] brought up a lot of topics that you normally don’t think about in terms of sustainability.”

Community Participation: Effective Stakeholder Involvement Throughout the Project Lifecycle is one course ASCE will be offering in its best practices series in sustainable engineering.