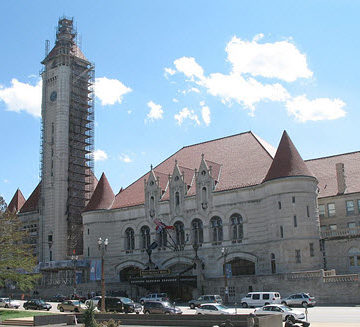 St. Louis’ historic Union Station, once the world’s largest and busiest train station, marked its 120th anniversary this past September, reminding us that at its height, 22 U.S. railroad lines from east and west terminated there.

A “union station” is a railway station where tracks and facilities are shared by two or more separate railway companies, allowing passengers to connect conveniently between them. In 1889, 7 railroad companies that had consolidated their operations within the St. Louis metropolitan area founded The Terminal Railroad Association of St. Louis and made it their primary goal to build a new union station. For its design, they selected St. Louis architect and former railroader Theodore C. Link, of the firm Link and Cameron, with structural engineer George H. Pegram serving as the chief design engineer.

Link designed 3 main areas of the station: the Headhouse, the Midway, and the Train Shed. The Headhouse contained the Terminal Hotel, ticket offices, waiting rooms, a restaurant, and offices for the Pullman and Terminal Railroad Association Companies. The Midway was the covered transfer area for passengers. The Train Shed was a large, roofed area covering the loading platforms and track.

The cornerstone was placed on July 8, 1893, and following the arrival of the first train on September 1, 1894, at 1:45 a.m., Union Station officially opened – a monument to St. Louis’ sense of itself as an industrial powerhouse and national crossroads. About 20,000 men and women, many in tails and gowns, crowded the Grand Hall and strutted along the 606-foot-long Midway to the tracks.

The project was built at the cost of $6.5 million. The castle-like Headhouse and Midway, built in the French Romanesque style, are constructed of Indiana limestone, with towers featured on the exterior and a grand 280-foot clock tower as the centerpiece. The 10-acre Train Shed, 700 feet long and 606 feet wide, initially included 42 tracks underneath and used the longest metal roof trusses ever constructed, to span 32 sets of tracks. Structural engineer Pegram used a patented configuration of his own design, known as the Pegram truss, which is built of structural steel and has engineering features artistically articulated and left exposed.

The gem of this new station was the Grand Hall, with its gold leaf, Romanesque arches, 65-foot barrel-vaulted ceiling, and stained glass windows. The most magnificent of these stained glass windows is the “Allegorical Window,” which is majestically framed by the famous “Whispering Arch.” The hand-cut Tiffany stained glass window features 3 women, representing the main U.S. train stations during the 1890s: New York, St. Louis, and San Francisco.

In the early 1900s, Union Station was the hub of passenger railroad traffic in the central U.S. It was one of the first stations to serve as a centralized terminal for multiple railroad lines. It originally served 22 rail lines – 13 from the east and 9 from the west. In 1903, the station was expanded to accommodate visitors to the 1904 St. Louis World’s Fair. In the 1940s, Union Station handled 100,000 passengers a day. The famous photograph of Harry S. Truman holding aloft the erroneous Chicago Tribune headline “Dewey Defeats Truman” was shot at the station as Truman headed back to Washington, D.C., from Independence, Missouri, after the 1948 Presidential election. The station ceased operating as an active train terminal in 1978, and reopened in 1985 as the largest adaptive reuse project in the U.S., providing shopping, dining, entertainment, and hotel accommodations.

Union Station was dedicated as an ASCE National Historic Civil Engineering Landmark in 1981.