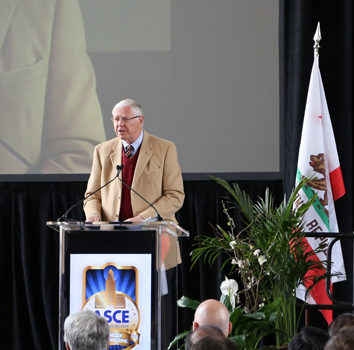 ASCE’s Los Angeles Section knows a thing or two about an anniversary celebration.

The Section, which held its first official meeting on October 14, 1913, celebrated its 50th anniversary in fine fashion by producing a professionally designed 80-page pamphlet, hosting a special 50th anniversary meeting and luncheon, and receiving a resolution from the Los Angeles County Board of Supervisors and a proclamation from the mayor of Los Angeles.

Building on their past experience, the Los Angeles Section celebrated its 100th anniversary with a series of events and activities that began in 2012 and continued throughout 2013. The celebration recognized the contributions that civil engineers in Southern California have made in the past and present, and expect to make in the future. Aside from producing a centennial medallion, lapel pin, logo, and banner, the Section developed a series of 3 videos, produced a Section historical timeline, and organized an Infrastructure Symposium, a Centennial Celebration Awards Dinner, a high school Popsicle Stick Bridge contest during Engineers Week, and special Life Member Forum programs and Younger Member Forum events.

Also, joint anniversary events are scheduled with the Los Angeles Aqueduct and Colorado Street Bridge in Pasadena, which are both celebrating their 100th anniversaries this year. In addition, the Section has been publishing a series of articles in their newsletter, focusing on a different civil engineering infrastructure theme each month. The Section hopes to compile these articles into either a book or an online product in the future.

“The anniversary celebration is a great opportunity to showcase those contributions people in the civil engineering community achieved – [oftentimes sacrificing] a great deal – to make a difference in the quality of life for future generations,” explained Mark Norton, P.E., LEED AP, F.ASCE, chair of the Centennial Committee’s Public Outreach Committee, ASCE Region 9 governor, and past president of the LA Section.

“It’s interesting that 50 years ago there was a pamphlet and a luncheon put together by another LA Centennial Committee which provided us with a guide on how to develop a program of events this year. Andy Machen, co-chair of the LA Section’s History and Heritage Committee, did quite a bit of research and provided a lot of good resources. That is part of the reason we had infrastructure-themed articles highlighted every month [in our newsletter]; these will eventually be compiled and look very similar to what they did [with the pamphlet] 50 years ago.”

“Civil engineers have made a significant contribution to people’s everyday lives in the Los Angeles area, from the time they get up in the morning and turn on their tap and get clean water, to going down to their car and driving to work on highways and over bridges,” added Jay Higgins, chair of the Centennial Committee’s Fundraising Committee, Region 9 governor, and past president of the LA Section. “And when it rains, all the stormwater is captured and flooding is prevented but the public just assumes that those things are there and they take it for granted.

“The idea behind our anniversary celebration and the development of the three videos is to let people know what civil engineers do and how it affects their everyday lives by highlighting our accomplishments over the past 100 years and also looking to the future; especially when you are talking about things like the development of a high-speed rail system here in LA.”

To accomplish all of their planned events, Norton and Higgins said, a Centennial Committee was first convened in April 2011. The Committee, which was chaired by Don Sepulveda, P.E., F.ASCE, was made up of the past 10 presidents of the LA Section plus Machen and Mary McCormick, president and CEO of MBI, a Los Angeles-area marketing firm. Past ASCE President and LA Section President Bob Bein, P.E., L.S., Pres.01.ASCE, was named honorary chair.

“The first step was to decide what we wanted to do and then prepare a budget and schedule for these things,” recalled Norton, who is a water resources and planning manager for the Santa Ana Watershed Project Authority. “We envisioned a commemorative coin, development of a new logo, a banner, a commemorative medallion, a Section historical timeline, some marketing flyers, and a number of videos. We decided to hire the marketing firm of MBI for our celebration, which helped a lot with developing these tools in a very cost-effective way. And we also decided to hire The Baker Group as our event planner.”

“The first video was a very powerful one-minute introduction video about civil engineering; the second video a two-minute sponsorship video to encourage people to volunteer; and the third video was 10 minutes, encompassing civil engineering and our Centennial Celebration. All three videos and the Section timeline are posted on our website and ASCE’s YouTube channel.”

“A significant part of our centennial celebration was our Awards Dinner, which honored individuals and projects not only in the Los Angeles area but throughout Region 9,” says Higgins, who is the senior project manager in the Los Angeles office of the URS Corporation.

During Engineers Week in February, the Los Angeles Younger Member Forum held its 19th Annual Popsicle Stick Bridge Competition at Union Station. This year a total of 75 teams, representing over 170 students from high schools throughout the Los Angeles area, showed up at the competition. Plaques, medals, and awards totaling $1,000 were presented for the overall combined winner of best bridge design, best presentation, best poster, and best technical paper. The full-day event was not confined to building a Popsicle stick bridge and testing its strength, but included a poster competition, technical reports, student presentations, a tour of Union Station, and impromptu events.

Higgins says that they raised approximately $99,000 for the Infrastructure Symposium and the Awards Dinner and about $58,000 for the remainder of the events and materials. Among the many sponsors was the ASCE Foundation. HDR was the overall Symposium Presenting Sponsor, with CH2M Hill sponsoring the water track and AECOM sponsoring the transportation track.

“We got a lot of positive feedback from the infrastructure symposium,” notes Higgins. “One of the outcomes is that we want to have everyone in Region 9 be able to participate in this kind of symposium. So Region 9 is going to try and rotate the location of its annual infrastructure symposium, spreading it around to the other Sections, and tying it to other future anniversary celebrations. For instance, next year’s symposium is going to be held in San Francisco and then in 2015 it is going to be down in San Diego, which will celebrating its 100th anniversary.”

“I really do feel that so far this has been very successful,” concluded Norton. “I have a great deal of respect and admiration for all my colleagues on the Centennial Committee and all the other volunteers in the Section and Branch who have helped to make our events very special and very effective.

“In the end, what we were trying to do with all these events is bring attention and awareness to the value that civil engineering brings to the quality of life people have here in L.A.”

Next month, learn how ASCE’s Philadelphia Section is celebrating its centennial.