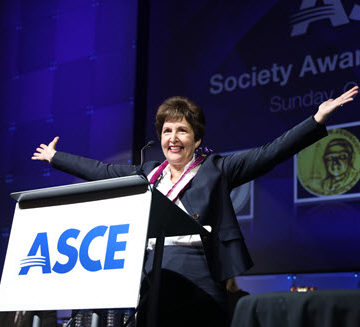 Robin Kemper was installed as the 2019 ASCE president during the annual business meeting at the Convention. PHOTO: Jason Dixson Photography

The thing about ascending to the ASCE presidency is the moment never comes as a surprise. After all, Robin Kemper was elected nearly 18 months ago.

But the lack of drama doesn’t make the moment any less sweet.

Kemper was inducted as ASCE’s 2019 president at the Society’s annual business meeting, Sunday, during the ASCE 2018 Convention in Denver, her family by her side, a tear in her eye.

“It was beautiful. It was emotional,” said Kemper afterward. “I wanted to recognize my mother (Rita Block), who passed just over a year ago. Hearing my daughters talk, having friends for over 40 years there – it is a very beautiful feeling.

“My hope as president is to leave the Society even better than it is today.”

“Here at this Convention, we’ve seen that theme of looking to the future and addressing those issues which will necessitate change, in my opinion, permeating through all the events I’ve attended,” Kemper said. “Kristina talked about it, [Convention keynote] Dirk Ahlborn talked about it. People are recognizing that the world is changing at an increasing pace – whether we’re talking about climate change, the future of our profession, or our Society.

“Therefore, we have to be proactive and adjust and move forward. Everywhere I’ve been, all the talks I’ve had with people, I’m hearing the same themes throughout and it’s really resonating. It’s exciting.”

Kemper accepted the presidential gavel from Swallow in the annual ceremony. She had a large cheering section in the audience, including her father, Robert Block, husband, Chris Kemper, daughters Adena Blum and Erica Holland, and grandson, Jonah.

Mark Rusnica, former Region 1 director, has worked with Kemper in New Jersey since 2002. “I always felt she was a great organizer and a great orator. I just really admire her,” Rusnica said. “She’s got that tenacity, and she’s really able to pull people together for a common cause.”

Also during the business meeting, the Society recognized the new members of the Board of Direction and installed Kancheepuram “Guna” N. Gunalan as the 2019 president-elect.

Kemper’s first order of business will be convening a Board retreat – a new idea of hers – in Lansdowne, VA, in late November.

“I’m really looking forward to that,” Kemper said. “I’m hoping the retreat will form the Board as that cohesive team, understanding where we’re going to go and what we’re going to focus on.”