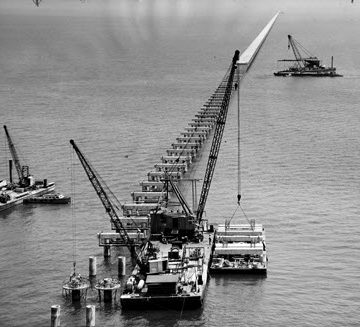 August marks the anniversary of the opening of the original span of the Lake Pontchartrain Causeway, northwest of New Orleans, LA. At 23.86 miles long, the Causeway is the world’s longest continuous bridge over water.

Lake Pontchartrain is a tidal brackish estuary, covering an area greater than 600 square miles with an average depth of 14 feet and a maximum depth of 65 feet. The lake forms the northern boundary of the city of New Orleans, which was established at a Native American portage between the Mississippi River and Lake Pontchartrain. In the 1920s, the Industrial Canal in the eastern part of the city opened, providing a direct navigable water connection, with locks, between the Mississippi River and the lake.

The idea of a bridge spanning Lake Pontchartrain originated in the early 19th century, and included an idea to build a series of artificial islands connected by bridges. By the 1940s and 1950s, New Orleans experienced growth and witnessed a renewed interest in a direct connection across the center of the lake so as to improve access from the north to the city.

Critical to the success of a bridge across the lake would be a supporting structure to overcome Louisiana’s soil, which is made up of soft clays and silts. A solution was found in an innovative application of prestressed concrete. The principle behind prestressed concrete is that compressive stresses induced by steel in a concrete member before loads are applied will balance the tensile stresses imposed in the member during service. Patented by a San Francisco engineer in 1886, prestressed concrete did not emerge as an accepted building material until a half-century later. 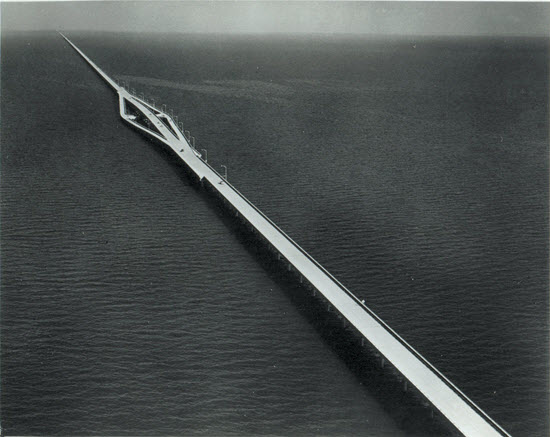 In the 1930s, Maxwell Upson, Chairman of the Board of the Raymond Concrete Pile Company, began taking an interest in the development of prestressed concrete. Over a decade of research led Dr. Upson to conclude that hollow thin-walled prestressed concrete piles were a viable alternative to solid concrete piles, revolutionizing the fabrication and installation of piles. With Upson’s innovation, workers on the Lake Pontchartrain Causeway used 54-inch-wide, hollow, prestressed concrete cylinders for the pilings. They were larger and stronger than those used in any past project. These large, prestressed hollow piles were ideal for developing the foundation for a bridge since they could withstand the hammer blows needed to drive the piles deeper into this type of soil.

A concrete casting plant was built at the northern end of the bridge, and the components were prefabricated and then barged out via the lake to the construction site. This assembly-line process significantly reduced both the construction cost and the installation time. The first piles were driven on May 23, 1955. After 14 months of construction, the Causeway opened on Aug. 30, 1956, at a cost of $46 million.

A second span was constructed which opened March 23, 1969. The bridges are supported by 9,500 concrete pilings and feature a bascule that spans the navigation channel eight miles south of the north shore. The length of the 23.86-mile-long Causeway is such that land cannot be seen from an eight-mile stretch at the center of the span. Following the construction of Jiaozhou Bay Bridge in 2011, Guinness World Records created two categories for bridges over water: continuous length and aggregate length. Lake Pontchartrain Causeway then became the longest bridge over water (continuous) and Jiaozhou Bay Bridge became the longest bridge over water (aggregate).

The Lake Pontchartrain Causeway was designated as an ASCE National Historic Civil Engineering Landmark in 2013.