Infrastructure Week 2018 Rallies Partners for the Work Ahead 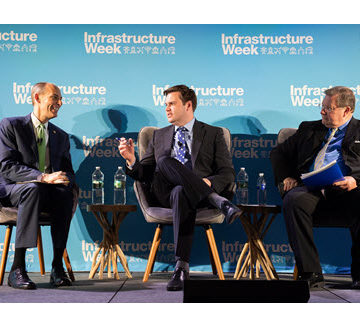 Fortunately, Infrastructure Week 2018 shows that ASCE has plenty of partners eager to take on the challenge.

“I’m energized by everybody’s interest, passion, and leadership,” ASCE President Kristina Swallow said. “Yes, we have a huge hill to climb, but we’re not alone. That’s what’s so cool about Infrastructure Week. It demonstrates the breadth of stakeholders who are all interested in working together to get to the top of that hill.”

Infrastructure Week features a series of events around the country, both educational and advocacy-focused. ASCE has taken a leadership role as a member of the steering committee, while individual Society members have organized and participated in Infrastructure Week programs this week, including Region 9’s Legislative Drive-In in Sacramento, CA, and a panel on the effects of Hurricane Harvey in Houston.

“It was really cool to have a kickoff event in L.A. because they get it,” Swallow said. “The panelists throughout the day were incredible – consulting leaders, labor leaders, elected leaders. And they all just get it, so that’s great to see.”

This year’s Infrastructure Week theme of “The future won’t wait. Neither can we,” struck familiar notes. The key to success may well lie in teamwork – across political parties, across engineering disciplines, across industries.

Infrastructure Week brings those often-disparate groups into the same rooms. Swallow shared the stage at the West Coast Kickoff event with an array of speakers that included Los Angeles Mayor Eric Garcetti, Gregory Kelly, president and CEO of WSP USA, and Phil Washington, CEO, LA Metro, among others.

Thursday, ASCE Past-President Norma Jean Mattei will participate in the Infrastructure Week Southeast Summit at the Port of New Orleans with the Governor of Louisiana, John Bel Edwards.

“We will not be able to solve this problem unless we have better partners,” said Steve Adler, mayor of Austin, TX, during one of the panel discussions.

“I think there is overwhelming popular support to build the infrastructure. … People understand that. I think the elected officials need to have more faith in the public, because the public is ready to take care of this challenge.”

Join the fight for adequate infrastructure investment. Visit the Issues and Advocacy page at ASCE’s website for ways to take part.