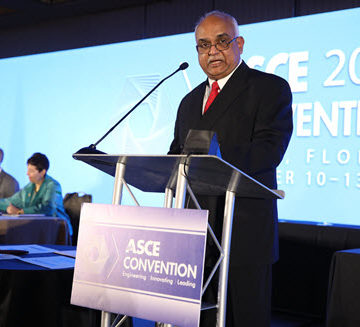 Kancheepuram Gunalan’s ASCE presidential year started with a beautiful speech … by his children.

“When I look at my father now, with everything in the past stripped away, I don’t see him for what he’s done but for who he is,” his daughter, Pallavi Gunalan, told the crowd, Oct. 12, at the ASCE 2019 Convention in Miami. “I see him for his empathy and his kindness.”

Gunalan, Ph.D., P.E., D.GE, F.ASCE, better known as “Guna,” was inducted as ASCE’s 2020 president during the Society’s annual business meeting at the Convention, taking the ceremonial gavel from Robin Kemper. Both Pavalli and Guna’s son, Kabilar, spoke with love and respect for their father before attendees gave him a standing ovation.

“It is, as they say, unreal,” Gunalan said. “When I look back to see where I started and where I am now, to lead the organization, to represent the profession and the members, it’s unbelievable. It’s been an incredible journey so far, and I’m looking forward to an amazing one ahead of us too.”

Gunalan is senior vice president of alternative delivery at AECOM, based in Salt Lake City, Utah. Born and raised in India, the son of a former member of Indian Parliament, Gunalan came to the United States in the early 1980s to pursue his civil engineering education and career. 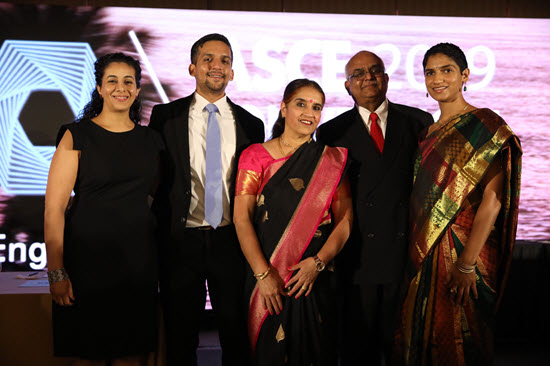 He joined ASCE as a doctoral student, and his active membership has included leadership roles as Region 8 director (2009-2012), Region 8 governor (2005-2007), Utah Section president (2002-2003) and Texas Section High Plains Branch president (1992). Most recently, he served as a governor for the Geo-Institute and was a member of the steering committee for the 2017 ASCE India Conference.

Gunalan uses the word “coalesce” as a touchstone for what he hopes to help ASCE accomplish during his presidential year.

“We want to focus our attention on specific things that are going to have a high impact,” Gunalan said.

To that end, Gunalan will convene a planning session with the Board of Direction Monday evening of this week’s Board meeting in Miami to set a prioritized agenda for issues to address during the next year. Gunalan, during his year on the Board as president-elect, emphasized the need to consider potential committee realignments.

“We must continue to stay nimble,” Gunalan said.