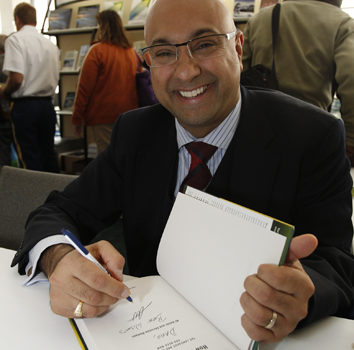 Ali Velshi signs copies of his book, How to Speak Money, at the ASCE bookstore following his keynote address at the ASCE 143rd Annual Conference in Charlotte.

Like ASCE, Velshi, the former anchor of CNN’s International World Business Today, is worried about the consequences of the nation’s underinvestment in infrastructure.

“We [The U.S.] are setting ourselves back in terms of safety, competitiveness, and jobs with our underinvestment in infrastructure. And as the [ASCE Failure to Act] report notes, the challenges are twofold: firstly, our physical infrastructure is being undermined by our lack of maintenance and renewal, producing both safety and productivity threats. And equally important, we are losing ground on a daily basis to the [foreign] economies that seek to draw businesses to them by offering them the best and the most efficient infrastructure in the world.” These comments Velshi made in his keynote address at the Society’s 143rd Annual Civil Engineering Conference in Charlotte, North Carolina, on October 10.

Velshi has written and reported extensively on the subject of infrastructure funding, in his prior role at CNN, as an author, and as the current host of Al Jazeera America’s Real Money with Ali Velshi.

“I have worked very hard at CNN and continue to work at Al Jazeera America to heighten public awareness of the seriousness of the issue,” Velshi says, “but frankly, we suffer from the sickness of having been the most developed country in the world for too long.”

Simply stated, Velshi says the problem is both lack of knowledge of the issue and political will to do something about it.

“The most unsophisticated homeowner understands how to do cost-benefit analysis on renovating a bathroom, building an attic, or replacing a roof,” says Velshi, co-author with Christine Romans of the book How to Speak Money. “But as a nation, we can’t seem to understand the potential payback of necessary investment in our built environment.

“So it falls on you [civil engineers], and I suppose me, to stimulate a dialogue about these matters.”

Velshi says America needs to overcome the fear of the “public and government” coming together to work on infrastructure projects.

“We have some Americans who think high-speed rail is part of a UN-sponsored plot to get Americans out of their cars and hence, rob us of our heritage. So you can see we have a long way to go.”

“It strikes me as a win-win situation for government, the public, and business,” he noted. “But obviously I’m missing something; otherwise everyone would be doing it.

Another interesting approach he shared with the audience is something called the West Coast Infrastructure Exchange, which involves California, Oregon, Washington State, and British Columbia, Canada. He says those state/provinces are trying to align infrastructure investment together.

“It’s an ambitious example of states figuring it out as the federal government checks out,” Velshi explained. “And they are working across borders. It’s a change of thinking that the states and cities [can work] on their own. It’s a cool experiment and a big shift in the way people think about infrastructure investment, but it shows that on the local level, people are stepping up and trying new things.”

Velshi introduced himself to the audience by sharing his respect – even awe – for the engineering profession.

“I fancied myself becoming an engineer,” he confessed. “But it wasn’t to be. I simply did not have the aptitude for it. Like your members of Congress, I apparently talk a better game than I walk.

“But I am fascinated by the work that you do. I sit [on committees of] the National Academy of Engineering, I am a member of the Board of Trustees of the X-Prize, and most importantly, I am in awe of what you and your profession have done to and for the world around us.”

Velshi thinks the future is bright for the civil engineering profession.

“The Department of Labor expects employment of civil engineers to increase by 20 percent, or about 51,000, between 2010 and 2020,” he points out. “The median income for a civil engineer is more than 50 percent higher than the national median. And while you are not paid as well as petrochemical engineers, who hold the title right now, the top 10 percent of you do quite well.”

The Move to Al Jazeera

Velshi explained his move from CNN to Al Jazeera America and implored the audience to give the new channel, which has only been on the air for 2 months, a chance.

“Some of you expressed concerns about Al Jazeera when I made the move, and that is understandable as America doesn’t have a lot of Arab brands for you to become familiar with,” he says. “[But] Al Jazeera America is a completely American station for an American audience, with an entirely American staff and management. It is not a Middle Eastern station and we don’t specialize in Middle Eastern or international news.

Velshi concluded his keynote by sharing with the audience his fears of what might happen should the federal government default and not raise the debt limit.

“If you have some time, call your congressman,” he says, “and tell them not to do anyth