In its First Year, Civil Engineering Clubs a Clear-Cut Success 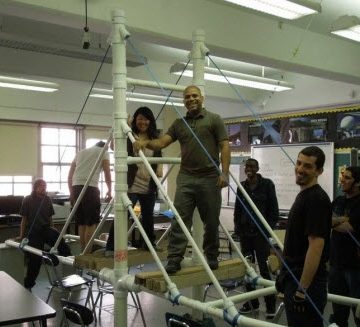 At their first Civil Engineering Club meeting this September, teams of students at Pearl City High School and Roosevelt High School, both in Hawaii, were challenged to see which group could construct the tallest structure using spaghetti strands in 18 minutes, while holding the weight of a large marshmallow. Aside from learning teamwork, Jon M. Young, P.E., LEED AP, M.ASCE, the Civil Engineering Club coordinator for Hawaii, says the activities taught the students how to test the strength and stiffness of material and ways to make a structure more stable.

“I think the students are always having fun when they are doing something rather than having to sit and listen to a lecture,” says Young, who when not running a Civil Engineering Club serves as executive director of the Hawaii Asphalt Paving Industry. “So anytime you have the students doing an activity like building a marshmallow tower, they enjoy it.

“I became an engineer because my dad was an engineer, not because I knew anything about it,” Young says. I think these clubs afford the students a chance to learn about civil engineering.”

Last year, as part of ASCE’s Civil Engineering (CE) Club Pilot Test Program, Young organized two CE clubs. Due to its overwhelming success with students, Young has expanded the number of CE Clubs in Hawaii from 2 to 4. And while Young organized both CE Clubs last year, this year he has been able to recruit at least one – and in some cases two – individual lead engineers for each of the 4 high schools.

“We basically have two club meetings a month [at each school] and the important thing to understand is that while each of the CE clubs function similarly, they are not necessarily identical in the activities they have,” notes Young, whose club size varies from 8 to 25 students. “At the Saint Louis School where I serve as lead engineer we are planning to have a civil consultant come to a club meeting and talk about a project that they designed that was done on campus. The four Hawaii clubs are going to schedule at least one excursion to a construction site, are going to schedule a visit to the University of Hawaii’s College of Engineering, and [they] also have a program where we arrange for five or six students to visit a local engineering firm.”

Individual engineers interested in starting a CE Club and participating in the pilot year were provided with a CE Club Guide, which included information to how to start a club, recruit volunteers, and establish a school partnership, and activity ideas such as bridge module, speaker ideas, field trips, and community service projects. They also received promotional materials such as membership cards and club certificates; giveaways such as backpacks, mini engineer scales, and pencils; books and magazines such as the latest issue of Civil Engineering magazine; and posters.

The CE Club program was established by the ASCE Committee on Pre-College Outreach as part of its effort to expand outreach to college-bound high school students and encourage them to consider engineering as a possible career.

An audit of the CE Clubs was recently completed by Concord Evaluation Group, and the findings demonstrated that the pilot year was a complete success. According to the audit, “the CE Club program was able to achieve its student-related goal of engaging young minds, influencing students’ perceptions of civil engineering, and ultimately opening the doors for students to consider the possibility of careers in civil engineering. Results showed that the CE Club had a positive impact on the students’ understanding about the field of civil engineering and how engineers work.”

“The CE Clubs have been an overwhelming success and [have] exceeded our expectations,” says Melissa Wu, P.E., M.ASCE, chair of ASCE’s Committee on Pre-College Outreach. “The results [from the audit] clearly documented that the CE pilot clubs that we had this past year had a really positive impact on students; they understood what civil engineering is and what civil engineers do, and it gave them clear and positive insights into important skills like teamwork, management, and leadership.

“The other thing that we are proud of from the results of the audit was that girls were just as happy with their experience in the club as were boys. So keeping diversity in mind, one of the things we achieved with the CE Clubs was our ability to reach out to females and underserved minorities who are not as represented within our field.”

Rewarding Experience for Students and Volunteers

Wu says that one of goals achieved by the CE Clubs was providing a personally and professionally rewarding experience for the volunteer engineers who served as lead engineers for the students. All the volunteer engineer leaders responded that they would recommend the CE Club to their colleagues, and most planned to participate again or, like Young, expand their clubs this year.

“The CE Clubs were not just a rewarding experience for the students – which was certainly one of our goals – but it also was very rewarding for the volunteers and faculty leaders that [sic] were involved…,” notes Wu, who is a wastewater engineer in the Seattle, Washington, office of CH2M HILL. “We found the volunteers who are involved really enjoyed organizing the clubs and doing projects with these students.”

Among the feedback received from CE Club participants were the following: The club taught students about the civil and engineering design process; the CE Club strengthened the student’s engineering and project management skills; the CE Club helped encourage students to imagine themselves as future civil engineers; and students were impressed with their engineering mentors, their hands-on activities, and field trips.

“This is actually my sixth year as a teacher, and we’ve done robotics, we’ve done the astronaut challenge, we’ve done civil air patrol, and we’ve done a number of things here, but at least for those kids who are interested in being engineers, there has never been anything that they jumped into and got involved in like the CE Club,” says George Bartuska, A.M.ASCE, an Earth Science teacher at Kathleen High School in Lakeland, Florida, and lead engineer for the local CE Club.

“One of the reasons we thought it was such a good idea to have a CE Club was it was not too long ago that there were a limited number of civil engineering graduates from the University of Hawaii,” explained Young. “Our concern was the lack of new civil engineers.”

Another key factor which Young and Bartuska say added to the success of their CE Clubs was its flexibility in the development of the club activities.

“The CE Club Guide was meant to be flexible and a resource for folks who want to use it,” says Wu. “Because one thing that we wanted to emphasize in our first year of the pilot test was that flexibility is key for the volunteers, the students, and the schools.

“We have had clubs take what we give them, modify it, or meld it into other activities that the students are interested in and that still fit into the framework of the club. We had one club design and build a stage set for their theatre production, using the principals of civil engineering. That may have been even more flexibility than we realized, but I think it was a key for the success of their club.”

“Last year I arranged to have speaker come in from the Department of Public Works for the City of Lakeland who talked to the CE Club students about a local geotechnical project,” recalled Bartuska. “Our speaker talked about a $30 million, 19-year project to build a [half-mile] road that had been affected by the phosphate mining done in the area. I worried the kids would be bored to death, but they were just fascinated.”

With the pilot test project a success, Wu says that the CE Clubs are now a regular ASCE outreach resource for membership. As of November there will be 14 CE Clubs.

“We’ve got four new clubs up and running this year and many returning clubs from last year,” concluded Wu. “We’re moving forward and developing additional modules. Right now we have a bridge module, and new this year we have a water module. Plus we are working on developing a transportation module, so we are going to continue to expand those activities and resources for clubs to use.

“We are really pleased with how our pilot test went last year and we are excited about our second year and growing the program. It’s certainly high on our committee’s list of priorities and we are always looking for ways to improve it and make it a really valuable resource for our members. Our audit concludes that the CE Clubs really achieve our goal of giving high school students a good understanding of civil engineering and what it is like to be a civil engineer, and hopefully some of them will pursue a career in civil engineering and become ASCE members down the road.”