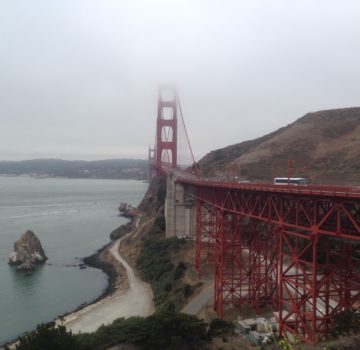 If you have a second day to explore San Francisco, hop in a vehicle and get to the Golden Gate Bridge. Actually, I’m a little embarrassed that I didn’t visit on day number one. The Golden Gate Bridge is, after all, one of the seven wonders of the modern world according to ASCE. It boasted the longest suspension bridge main span, 4,200 feet, from opening in 1937 until 1964. The two 746-foot-high towers were similarly the tallest of their kind at time of construction. And if you’re still not impressed by the statistics, consider that the two main cables contain 80,000 miles of wire. Somehow the never-before-tried construction was completed in just four years. And both design and built quality were sufficient to survive the 1989 earthquake that caused a portion of the Bay Bridge to pancake.

It’s not just the engineering feat that places the Golden Gate Bridge at the head of its class. It is stunning. Doubtless, you’ve seen dozens of postcard quality photos of the Art Deco bridge, but to experience it first hand is special. The designers took special care to proportion the towers, shape gusset plates, and locate rivets with care rarely seen in public works today. They must have cared deeply about the beauty of the bridge, but they didn’t over do it like so many recent cabled spans.

Walking along the deck is also a special experience. Even on the relatively calm day of my visit, the whipping wind and white-capped waves recalled the difficult construction conditions. While watching a container ship pass below the bridge I was also reminded that bridge serves as something of a gateway to the Pacific. The ships passing west are leaving the calm of San Francisco Bay and embarking on a long trip to the Orient. The bridge will be their lingering memory of man’s triumph over nature until they arrive at a safe harbor on the other side of the world.

My next tour stop likewise offered an opportunity to experience the Far East. A friend drove me back to Golden Gate Park and the Japanese Tea Garden. This was just the reprieve I needed to relax and clear my thoughts before another long day of exploration. The gardens were planted in 1894, original to the World’s Fair grounds for which Golden Gate Park was established. The Japanese-American Hagiwara family maintained the gardens from 1895 until 1942 when they were forced to relocate to an internment camp during World War Two. The garden would suffer for ten years before again being recognized as a Japanese symbol. It thrives today, and though small, provides a wonderful space for community activity (i.e. karate black belt ceremonies, as during my visit) and contemplation of nature.

Speaking of nature, the California Academy of Sciences is just across the street. The website informs that the Academy is more than a museum. Research is conducted on site to address the questions: 1) How did life on Earth develop and 2) How will we sustain life on Earth? I can’t answer those, because I didn’t actually go inside. I was more interested in the eclectic green roof structure containing two domes reminiscent of the primordial mounds from which life began in the ancient Egyptian creation story.

I just couldn’t get the right view from the ground, so I crossed the plaza again to look down from the observation tower of the DeYoung Museum. Although the building is supposed to feature the art inside, I was again more interested in the architectural exterior. The skin is clad with punctured copper. Although it’s a rather dull bronze today, it should overtime oxidize to the familiar greenish tone as in other historic copper structures. I think the transformation is part of the art. My particular interest, however, was the tower observation level, glazed floor to ceiling and offering a spectacular 360-degree view of Golden Gate Park and the surrounding city. From there I plotted my course back into the city.

I struck out on an eastward bearing, passing through more parklands and past the historic Flower Conservatory. After leaving the park, I veered south for a couple of blocks in order to continue along Haight Street. The Haight-Ashbury neighborhood was the epicenter of the Summer of Love. Hippies flocked to the community at that time based upon the counterculture ideals of sex, drugs, and rock’n roll. Allegedly it was possible to purchase marijuana and LSD at a local store. Musicians like Jefferson Airplane, the Grateful Dead, and Janis Joplin all lived nearby. Many tourists swing through the neighborhood hoping to share in the experience some 45 years too late. I have to say, it seems like a pretty typical yuppie neighborhood today. There’s no way the hippies could afford the rents now.

From hippie counterculture, the next turn in my journey was toward the wholesome family comedy Full House. A few blocks onward from Haight-Ashbury the homes get larger, more Victorian, and more painted. The “painted ladies” in Alamo Square served as the backdrop for the Tanner family’s picnic in the opening credit sequence. I decided to do the same. I grabbed a sandwich from a convenience store and enjoyed the views from the unexpectedly hilly park. If I had my bearing, it appears that one or two of the famously filmed homes had been demolished while construction crews regraded the site. Let’s hope the new construction matches the historic character of the neighborhood. 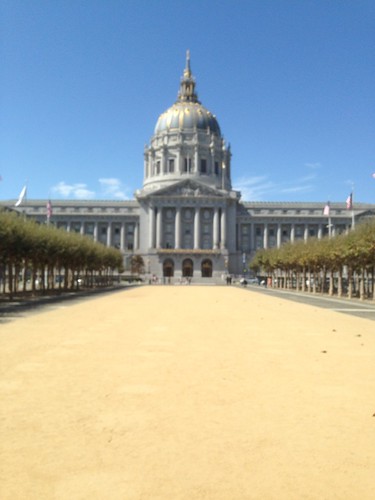 Restored with a hearty pastrami on rye, I continued my walk to the Civic Center. I cannot imagine what rent costs in the nearby neighborhood dotted with historic victorians and high end condos, just a short walk to the government center of the city. Meanwhile the lawn outside City Hall served as living room to dozens of homeless people. In contrast, the structure is one of the largest and most opulent city halls in America. The dome is the fifth largest in the world, taller than the US Capitol by 42 feet. The building provides more than half a million square feet, and the structural frame contains over 15 million pounds of steel. The size and style is owed largely to its era of construction, completed in 1915. It replaced another structure destroyed in the 1906 earthquake.

That concluded my whirlwind tour of San Francisco. I had traveled through time, across continents, and visited world wonders. Few cities can offer the cultural and architectural diversity of San Francisco, and I walked almost all of it! In the end, though, I was left pining for sweet home Chicago. It had been fun, but there’s no place like home.