ICSI 2017 Kicks Off With Local Solutions to Global Sustainability Challenges 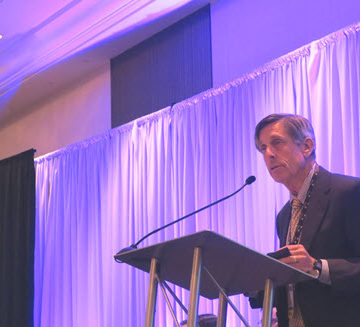 Paul Zofnass, founder of the Zofnass Program for Sustainable Infrastructure at Harvard, speaks during the ICSI 2017 opening plenary in Brooklyn.

If you’re waiting for some other, larger entity to swoop in and solve the sustainability infrastructure crisis, stop.

It may be a global problem, but the solutions start at home.

“Sustainability is really happening at the local level,” said Gregory Kelly, president and CEO of WSP’s USA and Latin America regions, during the ASCE 2017 International Conference on Sustainable Infrastructure, Thursday morning in Brooklyn. “I think we’re going to continue to see cities innovate. Sustainability’s not going to happen overnight. It’s a long-term approach. But I think we’re doing a good job with it right now.”

Kelly and an impressive collection of opening plenary speakers – which included Deputy Mayor of Paris Jean-Louis Missika and New York City Chief Resilience Officer Daniel Zarrilli, among others – launched ICSI 2017 with an urgent push for sustainable engineering, even as the United States plans to withdraw from the Paris Climate Accord.

“We have seen how the cities are stepping up, saying, ‘Listen, this is something that affects us,'” said Feniosky Peña-Mora, P.E., Sc.D., FCIOB, NAC, M.ASCE, ICSI chair.

“Because at the end of the day, all these cities are competing for talent. And talent is saying, ‘We want to live in a city that is a responsible steward of resources.'”

And it is this municipal leadership that is keeping the momentum going for sustainable infrastructure.

“I think the Paris Climate Accord is very important,” Missika said. “You could say it’s fundamental to all of humanity and the future of this planet. And the cities in the United States say that we’ll stick to the objectives.

“So it’s not good news that the federal government [has gone] away from this accord. But it’s more important to have these cities committed to this accord than to have the nation state.”

Local solutions. The motivation, meanwhile, is even closer to home: it’s personal.

“We are living off of infrastructure that those who came before us created,” Kelly said. “Now we have to think about those generations that follow us. We have to make it personal. What are we creating for those future generations? And what have we learned from those that came before us?”

ICSI continues through Saturday. Follow it on social media at #ICSI2017.