Chicago is a city of neighborhoods. Each area of the city has its own unique atmosphere, though how the vibe is interpreted can be very subjective. Over the years some neighborhoods have changed dramatically. This makes for a constantly changing urban fabric that remains current for the times. However, the diverse architecture of any given neighborhood marks the history of the place.

The architecture of Prairie Avenue retells all of Chicago’s history. On a rainy day in October, I toured several of the homes in the historic district. The opportunity was afforded by the Open House Chicago event sponsored by the Chicago Architecture Foundation. Every year, the CAF coordinates special tours in various neighborhoods to allow visitors a chance to explore the architectural treasures of Chicago. 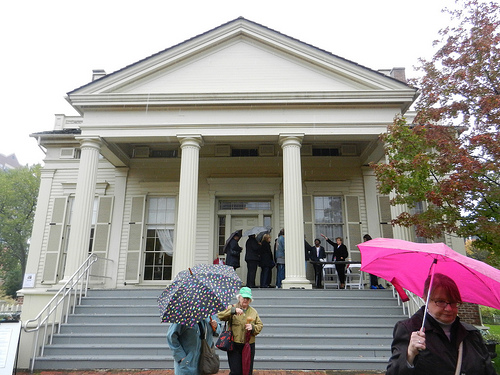 The oldest home in Chicago is now located near Prairie Avenue. The Clarke house was built in 1836, one year before the City of Chicago was incorporated. At the time, Chicago was still a frontier town. Mr. Clarke supported his family by trapping, hunting, farming, selling dairy products and acting as city clerk. His income from these activities was sufficient to build a nice-sized home in the Greek Revival style, which was popular at the time.

From the street, the Clark’s home looks a lot like a Greek temple. Four Doric columns extend up from a stepped porch and support a large triangular entablature. On each elevation there are several large picture windows that extend up from floor level. Inside, the home is laid out like a typical colonial, with kitchen and living and dining rooms on the first floor. Bedrooms are on the second floor.

Clarke House utilizes the timber frame method of construction. This method, which ties large timbers together with mortise and tenon joints, is known to result in a very robust structure. Over the years, the home has survived two fires and two cross-town moves. In 1977 the home was actually hydraulically lifted over the ‘L’ tracks in order to be moved to its current location. The longevity of Clarke House symbolizes the rugged fortitude of Chicago’s early residents whose hard work formed the foundation of a world-class city.

As early as 1885, Chicagoans began exploring new architectural forms to take advantage of the new materials and techniques of the era and to establish a unique architectural identity. Architect H. H. Richardson was commissioned by John and Frances Glessner to design a home for their corner lot on Prairie Avenue, then Chicago’s most exclusive neighborhood. Glessner’s neighbors included Marshall Field, Philip Armour and George Pullman. John Glessner made his fortune as a founding partner of a farm machinery company that merged with others to become International Harvester.

With a large budget, Richardson set out to design a radical departure from traditional residential design. From the street, the Glessners’ house presented an imposing fortress-like rusticated granite façade. However, the central courtyard permitted sunlight to bathe the home. The interior was detailed similarly to home of the arts and crafts style, which the success of the Glessner home partially propelled. Oak paneling, grand staircases and stately fireplaces provided an ideal setting for the Glessner’s own impressive collection of home furnishings.

Richardson’s design acumen began with admission to the prestigious Ecole des Beaux Arts in Paris. He went on to gain acclaim for his design for Trinity Church in Boston. His significant works include the New York State Capitol in Albany and the Allegheny County Courthouse in Pittsburgh. However, Richardson’s work on Glessner house may have had the most lasting impact on contemporary architecture. His design legacy continued on with Louis Sullivan and Frank Lloyd Wright. Over the years, Prairie Avenue lost its allure to the well-to-do of Chicago. The near south side became an industrial center, close to the lakeside rail corridor. For a time, Chicago’s organized crime leaders tightly controlled this area. However, in the past few decades Prairie avenue has again become a desirable residential location. It’s conveniently close to the McCormick Conference Center and has ready public transportation into downtown.  Unfortunately, many of the beautiful old homes were demolished, leaving only a couple blocks that recount the rich history. We are fortunate that the Clarke and Glessner house remain and are now protected as museums by the City Parks District.