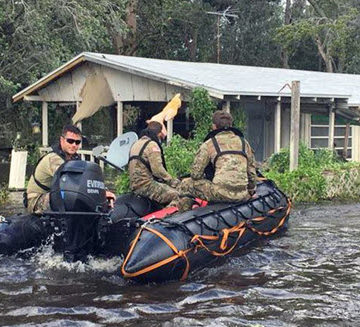 “It doesn’t matter what you used to do,” Brumund said. “We’re having fun, making a difference.”

Estep reached out to the local ham radio community to see if they’d be interested in volunteering at the county’s emergency communication room. Many were, and Brumund and his colleagues have staffed the emergency operations center communications room five days a week, providing situational awareness on weather, accidents, emergencies, hospitals and other issues.

But that’s not all. Estep funded the volunteer crew to get top-of-the-line training in FEMA courses in the incident command system, and Department of Homeland Security courses in communication interoperability issues. So, these ham radio operators are well prepared when disaster strikes.

“Since we have all gone through all that training,” Brumund said, “we have really become embedded in the county emergency response team.”

Their preparation for Hurricane Irma went back two weeks, while the storm was forming in the Atlantic Ocean.

“When it looked like this storm might come over here, the director said that we need to start preparing for the possibility that the storm will center on our county,” Brumund said. “You get your go-kits, clothes, your medicines. As it got closer, the county expanded the ICS team as needed.”

With Irma bearing down on northern Florida, Saturday evening, the county opened five of the nine possible shelters for those coming from the mandatory evacuation areas. Amateur radio operators staffed shelters, while Brumund and others staffed the Emergency Operations Center to coordinate communications between the shelters and the ICS team. 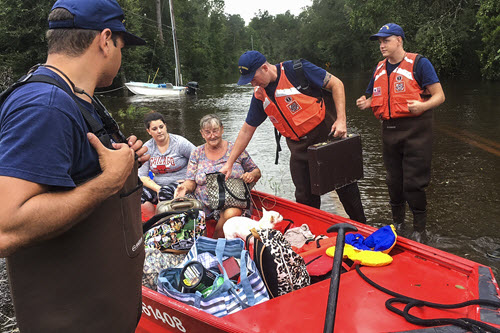 Brumund was sleeping his four hours between shifts when the crew awakened him at 3:30 in the morning. The county’s main 800-megahertz repeater went down.  This system handled all 911 calls, the police, and fire and rescue communications.

“It’s raining like the Second Coming. The wind is blowing,” Brumund said. “There’s no police communication, no fire, and no 911. The cellphone coverage was spotty.

“That was a pretty severe emergency when you lose all your communications there.”

The ham radio crew maintained contact with the shelters and provided information to police officers who were near or in the shelters. Meanwhile, thanks to that emergency preparedness training, Brumund knew how to send an effective, specific request to the state interoperability coordinator for mobile repeaters, radios, and tower to help bridge the communication gap.

Fortunately, it was determined that the generator that powered the 800 MHz repeater system did not start when the power went out. With the problem discovered the solution soon followed, and the generator was able to be restarted, putting the county’s communications back online.

“It was pretty tense for a while,” Brumund said. “We’ve never had that happen before.”

Florida faces a long, difficult, and expensive cleanup. Whether it’s during the emergency, in the recovery mode, or a site visit to a nearby dam that was breached because of the hurricane rain, Brumund and his colleagues are committed to helping their county regroup.

He may be retired, but he’s still a civil engineer.

“There are lots of opportunities if individuals want to help and volunteer in the sheriff’s department or the emergency management center,” Brumund said.