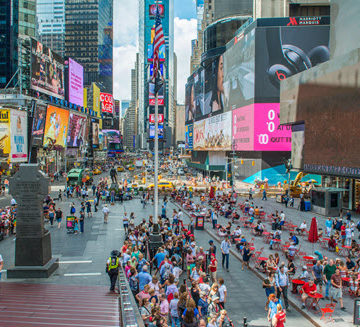 In today’s Times Square, it’s really more about the benches than the billboards.

Opened just in time for the classic New Year’s Eve celebration, the New York City Department of Transportation’s Times Square Plaza overhaul has been by all accounts a tremendous success. Nearly eight years in the making, the project has turned Times Square from a car-clogged chaos into a pedestrian-friendly paradise.

To consider what makes it work, pay special attention to the benches.

The 11 benches placed strategically around the plaza tell you everything about the NYC Department of Design and Construction’s systems approach on the project.

Before committing to anything, designers at DDC wanted to see how the Times Square space was used in daily life. The team started watching the structures in place at that time and how people interacted with them.

“The designers noticed that some people actually laid down on the structures,” said DDC Commissioner Feniosky Peña-Mora, P.E., Sc.D., FCIOB, NAC, M.ASCE. “Others reclined three-quarters to look up and see the buildings, to see the lights. Some other people reclined toward the structures with one leg up.”

So with its anthropological research in hand, the team ensured that the new benches in the new Times Square Plaza are not merely standard flat surfaces; the granite slabs come in a variety of heights and slopes. 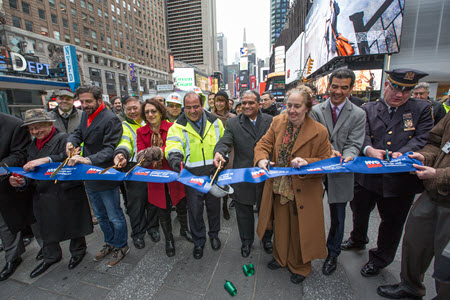 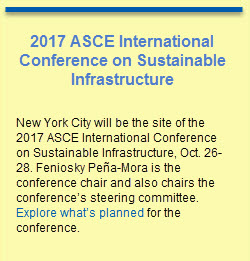 Their placement is positioned to both ease the flow of New Yorkers in a hurry to get about their business and create open spaces where Times Square tourists can take in the scene at a slower pace. The locations also satisfy security demands. And the benches also contain utilities for electrical and data use when the plaza hosts events.

It’s representative of the overall project, one that saw every decision take into account its practical effects on the community.

Pedestrian barriers are one example. The department was worried about the negative effects of long-term construction on Times Square, from traditional commerce to tourism to the views afforded audiences on Good Morning America.

So it engaged with artists to devise ways to disguise the construction work. One project had tourists look into cameras, and then photographs of their eyes were printed on large screens and used to cover pedestrian barriers.

“That became like an art exhibit,” Peña-Mora said. “We tried to make sure our construction was not imposing on the daily lives of New Yorkers and tourists. We hope they saw it as part of the fabric of what New York is. It was like a temporary art installation of the fabric of Times Square.” 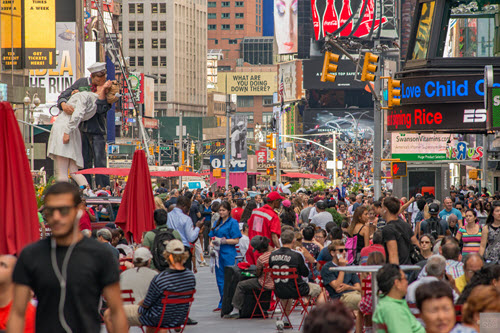 Times Square is not called the Crossroads of the World for nothing. Courtesy NYCDDC

The overall project naturally had its challenges. Some of the subsurface infrastructure was more than 100 years old and required replacement. The project created an excitement of anticipation that attracted new private investment to the area, which in turn meant private construction – new hotel facades and the like – on top of the DDC work.

The entire project required coordination among a vast array of stakeholders, agencies, and groups.

“That requires a lot of give and take,” Peña-Mora said. “… But we were able to manage. Sometimes there were tensions, but we all worked it out.”
Peña-Mora led a group at a ribbon-cutting event for the project just in time for the nation’s eyes to focus on Times Square to ring in the new year. One month in, the Times Square Plaza has been so successful, it’s being hailed as a trendsetter for potential similar projects in the New York area.

“People have responded very positively,” Peña-Mora said. “I think we have seen how everybody has taken ownership of the plaza.”

New York City will be the site of the 2017 ASCE International Conference on Sustainable Infrastructure, Oct. 26-28. Feniosky Peña-Mora is the conference chair and also chairs the conference’s steering committee. Explore what’s planned for the conference.