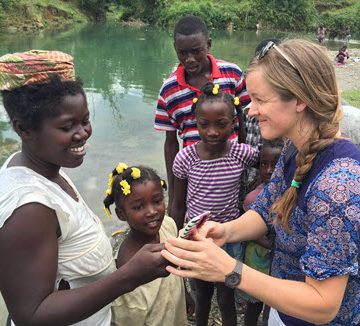 Avery Bang, EI, A.M.ASCE, is the president and CEO of Bridges to Prosperity. She is one of the engineers featured in Dream Big.

If last week’s pilot event is an indication, Dream Big and DiscoverE’s Girls Night Out program will be a dream combination.

With a series of activities developed around the giant-screen film Dream Big: Engineering Our World, a Girls Night Out trial run was held Dec. 8 at the Discovery Place Science Museum in Charlotte, NC. Forty-seven girls from nearby Eastway Middle School attended, trying out a series of hands-on activities, hearing from professional engineers, and viewing a cut of Dream Big, set to premiere in February during Engineers Week.

The film made quite the impression.

“I wasn’t interested in engineering before I saw the film, and now I think this could be my future,” said an 11-year-old student named Mya.

Mari, another girl from Eastway, said, “The film was so inspirational, I almost cried.”

Women made up only 15.1 percent of the engineering workforce in 2015, according to a report by the Bureau of Labor Statistics and the Engineering Workforce Commission.

The Girls Night Out events are designed as a kind of prepackaged outreach activity that groups can use with the film. The idea is that museums will invite girls and their female relatives and teachers to the Girls Night Out for film screenings and educational activities to improve girls’ attitudes toward engineering and encourage them to pursue engineering as a potential career.

“It’s really important to expose girls to these kinds of career paths and career ideas. That’s what I strive to do with my everyday work,” said Maggie Connelly, Girls in STEM coordinator at Discovery Place. “I think the Girls Night Out event really opened up their eyes.”

Avery Bang, EI, A.M.ASCE, is the president and CEO of Bridges to Prosperity. Her work building a bridge in Haiti is featured in Dream Big.

“I believe that every young woman and girl should understand that they can do this,” Bang said. “This is not only for men, this is not only for a certain class of people, it’s not only for people whose parents or uncles or grandfathers were engineers. Engineering is very accessible, and I think that accessibility can build belief.”

The Dream Big project is led by ASCE with a coalition of engineering organizations and support from Bechtel, the ASCE Foundation, the United Engineering Foundation, and NCEES. Dream Big: Engineering Our World is presented by Bechtel and produced by MacGillivray Freeman Films in partnership with ASCE.