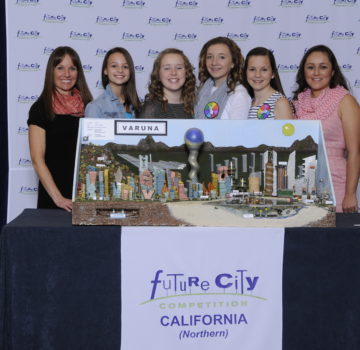 “The girls are just so very creative,” says civil engineering mentor Evangelina Paoluccio, P.E., an associate engineer with NV5. “They brought their ideas to paper, built their model, and everything just came together.”

A team of 3 middle school students from Girl Scout Troop #2225 in Modesto, California, designed an inventive transportation system of the future and, for the second consecutive year, won ASCE’s Most Innovative Design of Infrastructure Systems award at the DiscoverE 2014 National Engineers Week Future City Competition, held during National Engineers Week.

The Future City Competition, which is celebrating its 21st year, is a national, project-based learning experience where students in grades 6-8 design and build cities of the future. Teams of at least 3 students, together with a teacher and engineer mentor, plan cities of the future by first researching and then writing an essay explaining their solution to an engineering problem. This year’s topic was “Tomorrow’s Transit: Design a Way to Move People In and Around Your City.” Using SimCity 4 Deluxe software, the teams then build a tabletop scale model using recycled materials.

More than 40,000 students from 1,350 middle schools competed in this year’s competition, presenting their models at 37 regional competitions throughout the U.S. in January. The regional winners competed at the national finals held at the Hyatt Regency Capitol Hill in Washington, D.C., on February 18.

Kiana Engel, Kristyn Dexter, and Madison Whisenand, under the direction of their educator, Kristi Engle, and civil engineering mentor Evangelina Paoluccio, P.E., designed a sustainable city called Varuna located in Australia where they were able to keep traffic moving at a smooth and efficient pace through the use of high express tubes.

“We designed our city, which has a population of around 500,000 people, based on what we believed would be tomorrow’s transit system,” explained Dexter, who added that they didn’t know anything about engineering before they started this project. “[The express tubes are] actually powered by electricity and [the vehicles are] propelled by magnetic levitation so it is a fast and more efficient way of getting through a city as opposed to the bus stop of today.

“Then we designed other things in our city like flying drones and personal vehicles that are powered by what we call ‘Algal Fuel,’ which is made out of algae. In an effort to make our city more sustainable, we designed things like vertical gardens on the rooftops, which is where the residents of the city get all of their produce so they can live a healthier lifestyle.”

After pausing a moment, Dexter said, “We didn’t really know what we were getting ourselves into when we started this project back in September [2013], but it turned out to be a really fun process.”

“The girls are just so very creative,” noted Paoluccio, an associate engineer with NV5. “They brought their ideas to paper, built their model, and everything just came together.”

Girl Scout Troop #2225 also was selected as one of the 5 finalists of the national competition, ultimately earning Honorable Mention and a $750 scholarship from IEEE-USA (Institute of Electrical and Electronics Engineers) for their school’s STEM (Science, Technology, Engineering, and Math) program.

“It obviously was very exciting; but we are so proud to have won [ASCE’s] prestigious award,” added team educator Kristi Engle. “This took a lot of hard work and dedication to get here. As their mentors, we just had to consistently continue to encourage them, because just in meetings time alone, they spent 250 hours working on this project.

“They are learning real-life examples of what it takes to not only be winners but also how to do the best you can at work, school, anything that you are involved in; the girls can definitely take that from this experience.”

“I am counting on our next generation to carry forward America’s spirit of scientific discovery,” said President Barack Obama in a statement read at the competition. “We need the talent of all our young people and I applaud the efforts to introduce girls to the field of engineering. As long as today’s students remain diligent and daring, creative and focused, I am confident they will foster the kind of innovation that makes a lasting difference in our country and our world.

“Today’s engineers are using science to better our world and tackle pressing challenges of our time – from improving health and harnessing clean energy to protecting our shores and strengthening our infrastructure.”

Obama concluded by stating, “I wish our students all the best as they push themselves to dream big and reach their full potential.”

This year, the first-prize winner of the Future City Competition was a team from St. John Lutheran School in Rochester, Michigan. For finishing first, Rebecca Oleskie, Paul Rosa, and Justin Judd won a trip to the U.S. Space Camp in Huntsville, Alabama, sponsored by Bentley Systems Incorporated, and $7,500.00 for their school’s STEM program.

“I think the reason why we won the competition is that the transportation system we designed was really accessible to everyone” says Rosa. “No matter what kind of transportation system you design or no matter how fast of a transit system you build, if you don’t make it accessible and easy to use, then it is not a good solution and you are not going solve traffic congestion. And if you don’t make it affordable, there is a whole group of people who are not going to be able to use it.”

“This was just an awesome thing,” said their teacher, Jon Pfund. “I started doing [Future City] 18 years ago and I’ve had 17 teams and this is the first time that we took first place in the national competition; it was a surreal experience.”

“We designed our city, based on what we believed would be tomorrow’s transit system,” explained Kristyn Dexter.

“I did the same sorts of competitions when I was growing up and I loved this stuff,” says mechanical engineer Nate Ball, master of ceremonies at the competition and host of Design Squad on PBSkids.org. “Getting a chance to use your own analytical skills to create something new that has never existed before for the benefit of yourself and the people around you, that is what is engineering is all about.

“Once you get a sense of how your own education can impact your ability to make a difference in the world that early on, that puts a totally different spin on the rest of your high school career, not to mention college; it just gives them a visceral taste of engineering early on.”

“At TE we think of engineers as heroes,” remarked Rob Shaddock, executive vice president and chief technology officer for TE Connectivity and one of the speakers at the competition. “And I was looking at all the presentations that these students have done [at the competition] and I was thinking, There are future heroes here. These students have put an amazing amount of thought, inventiveness, and imagination into these presentations…a whole [lot] of problem solving.

“Engineering is not just about being good in math and science. The thing that I look for in an engineer is curiosity: how does something work, how to make it better, and a desire to make things. I think all of the students [at this competition] really showed that.”