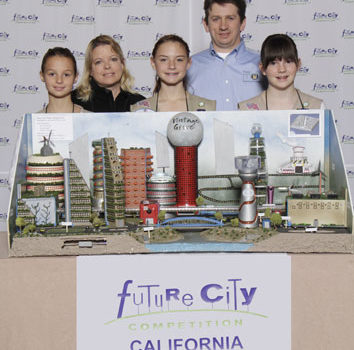 For their design of “Vintage Grove,” a sustainable city in the year 2150, Girl Scout Troop 2225 from Modesto, California, won ASCE’s Most Innovative Design of Infrastructure Systems award at the National Engineers Week Future City Competition, held at the Hyatt Regency Crystal City in Arlington, Virginia, on February 20. This was the first time a Girl Scout troop competed in the Future City Competition, which is now celebrating its 20th year.

Kristyn Dexter, Katrina Fitzpatrick, and Kiana Engle, under the guidance of teacher Lori Dexter and engineering mentor John Paoluccio, designed and built a scale model of a city where they successfully recycled water, wastewater, and waste into reusable products that serve their community.

“What we saw from [the Girl Scout Troop] was the development of a whole different kind of transportation system where they did not use cars anymore but something called orbs, which I believe was on a Maglev system that would allow them to go between their various houses and village and so forth,” said ASCE President Gregory E. DiLoreto, P.E., F.ASCE, who judged the award along with David D. Dee, Jr., P.E., D.WRE, M.ASCE. “They clearly embraced the idea of an entire water cycle for their community where water was not wasted but every drop was used. In terms of trash, these young ladies turned their solid waste into heat, into another recycled product that could be reused as a valuable resource by the community.”

“During the judging, what we were looking for [from the students] were things that we don’t frankly see today,” explained DiLoreto. “We did not ask them practical questions like how are you going to pay for this or how is this going to get built because that is irrelevant; what is relevant is how wide can their imagination go?”

“We were very excited to win this award,” says Fitzpatrick. “The city that we designed has a lot of sustainable aspects that we Girl Scouts believe in and want to see in the future. We learned a lot about city planning, but in the end, what we really learned is how to work as a team.”

In designing their future city, called Vintage Grove, Fitzpatrick says they not only learned about the many different kinds of engineers and the jobs they do, but their project also piqued their interest in becoming engineers themselves.

“Originally we got involved in Future City for fun,” she recalled. “But after this [experience] many girls [became] interested in engineering, inventing, and designing different things.”

The Future City Competition is a national, project-based learning experience where 6th, 7th, and 8th grade students design and build cities of the future. Working in teams of at least three students, a teacher, and an engineer mentor, together they plan cities of the future by first researching and then writing an essay explaining their solution of an engineering problem. This year’s topic was rethinking runoff, where students were asked to design clean solutions to manage storm-water pollution.

According to Thea Sahr, director of programs for the National Engineers Week Foundation, which organizes and sponsors the Future City Competition, this year more than 35,000 students participated, representing over 2,220 teams from various middle schools nationwide. Thirty-six regional competitions were held in January.

“I have actually begun using a new word to describe Future City, and it is transformative,” says Sahr. “[Future City] is a transformative project-based learning opportunity for kids in 6th, 7th, and 8th grades where they spend four to five months every year dreaming and thinking, and designing and planning, and building the cities that they want to live in; the cities of the future. So what Future City is all about is giving these kids a chance to think about themselves, their friends, their families, and what kind of world that they want to live in, and that is the door that we use to invite them into the world of engineering.”

Sahr says she is impressed by the stories that she hears from parents of students who are involved in Future City.

“I recently received an email,” she recalled, “from a mother of a student saying, ‘before she got involved in Future City, my daughter was getting C’s and D’s in math and science and now she is getting A’s and B’s because it opened her eyes to a whole range of possibilities.’ So we want [students] to discover engineering, we want them to discover science and math and see it as a pathway towards being part of an innovation economy that past generations have left and all your current ASCE members have helped to build. That is why Future City is a transformative experience, because it really lays the groundwork for kids to visualize not only what the world can become but what they can become.”

“What Future City is trying to do is get kids to think about engineering,” added Donald G. Wittmer, P.E, M.ASCE, Chicago area regional coordinator for the Future City Competition and transportation department manager for the Chicago, Illinois, office of the HNTB Corporation. “I know 10-15 years ago you would ask kids what an engineer is and they think you are driving a train or something. Today, Future City is helping kids to understand what an engineer is and what we do.”

This year, the overall first prize national winner of the Future City Competition was a team of students from Valley Middle School in Oakland, New Jersey. Anna Butler, Padraic J. Burns, and Sophia Kotik won a trip to the U.S. Space Camp in Huntsville, Alabama, sponsored by Bentley Systems Incorporated.

“I am extremely proud of them,” said their teacher, Judith Vihonski, who has had a Future City Competition team from Valley Middle School representing New Jersey in the nationals for the past 12 years but had never won the competition. “We’ve finished second two or three times but were never able to win the big one, so I am really excited that we finally won.”

“We are so happy that all of our hard work paid off,” says Kotik, who after this experience is interested in becoming an engineer. “We definitely learned how to work well with one another because we have three completely different personalities.”

Finishing second in the competition was Veritas Homeschoolers Support Group, from Gilbert, Arizona, which received a $5,000 scholarship from the National Society of Professional Engineers Educational Foundation for the group’s middle school technology program. Queen of Angels Catholic School in North Huntingdon, Pennsylvania, finished third in the competition and received a $2,000 scholarship from the Institute of Electrical and Electronics Engineers for their school’s technology program.

“I think me earning this award will inspire people who have been involved in Future City in the past to come back and volunteer as a judge or a regional coordinator,” says French, a 2012 graduate of Carnegie Mellon University with a bachelor’s degree in civil engineering and public policy. “I knew back in 4th grade that I wanted to be an engineer but I did not know what kind, so being involved in Future City helped me decide to become a civil engineer.

“I can honestly say that Future City changed my life and the lives of all the others who competed throughout the years.