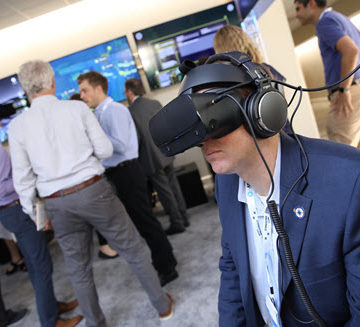 What if? Why not?

It’s the essence of ASCE’s Future World Vision project, simultaneously open to and questioning of the civil engineering possibilities that will shape the way infrastructure works and society lives decades into the future.

“We’ve got to have more people thinking this way,” said Lenor Bromberg, P.E., F.ASCE, deputy director of community development for the City of Roswell, Georgia. “We’re civil engineers, and we are creative people. We really need to use the intelligence and the problem-solving skills we have to create these solutions. It’s up to us to do it.”

Bromberg was one of hundreds of ASCE members who experienced the Future World Vision Floating City, which debuted this week at the ASCE 2019 Convention in Miami.

The mix of virtual reality experience and interactive desktop interface gave users the chance to explore the future infrastructure possibilities of a Floating City, an immersive world constructed in a real-time 4D computer simulation model.

“Honestly, I’m blown away. I thrive on this kind of thing, because I love studying social and environmental impacts,” said Garrett Wilhelm, S.M.ASCE, a senior at the University of South Florida.

“It really lends itself to asking yourself, ‘OK, what kind of infrastructure will be needed by society? And how is society affected by that infrastructure?’ Really looking at it as a holistic model.” 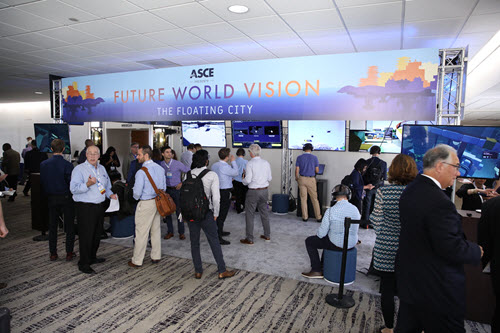 It was fitting that the Floating City future world’s first showing was in Miami, a city that already faces significant challenges to its status quo due to sea-level rise and flooding. James Murley, chief resilience officer for Dade County in Florida, was impressed.

“I think the underlying issues and drivers are things that our county deals with all the time – climate change and sea-level rise,” he said. “What will our community look like in 50 years? What scenarios are probable and possible, and how do we adapt over time?
To have this visualization strikes me as something very, very valuable. I want to learn more.”

The Convention kicked off with a keynote address from Alex McDowell, creative director and co-founder of Experimental, the Los Angeles–based company developing the Future World Vision immersive experience. McDowell, with more than 30 years of experience doing production design for major motion pictures, brings a unique blend of data-driven research and storytelling.

The idea isn’t necessarily to accurately predict the future as much as fundamentally reshape the way civil engineers approach potential challenges. And as a scenario-planning tool, Future World Vision’s appeal transcends engineering. 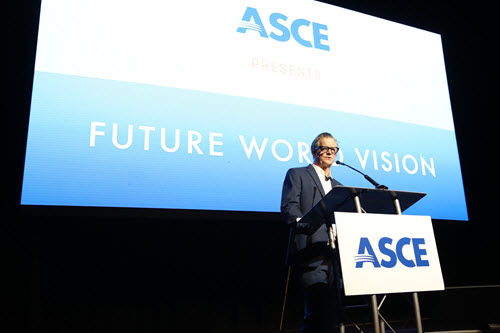 “From a non-engineering perspective but as a real-world citizen, it inspired me,” said David Clark, a program manager in the office of the chief financial officer for Washington, D.C., at the ASCE Convention to give a presentation about his team’s asset management program.

“I’m not sure we’re all going to live in shipping containers in the future, but I’m not sure we’re not either. In our profession, we’re more tacticians than strategists. So if someone can give us some direction and some inspiration like this, I think it’s easy to get on the bandwagon. With a vision in mind like this, it’s a lot easier to get where somebody wants to go.”

The Floating City is still in the proof-of-concept phase, and the Experimental team conducted two workshops at the Convention to gather input and ideas from attendees for continued enhancements.

Some of the ideas sounded outlandish. Some sounded brilliant. Some probably are a bit of both. What’s clear, though, is the passion civil engineers feel for this kind of big-picture, long-range leadership.

“I’m a millennial, and I think most of the millennial or Gen-Z engineers that I talk to have these ideas as a major focus,” Wilhelm said. “I don’t know if everyone I talk to has an idea of how they want to deal with it, but it’s something that’s ever present. Like we know we’re going to have to deal with these rising sea levels. We know we have to cut back on carbon emissions. We’re all looking for these solutions.”

Find out where you can experience the Future World Vision Floating City for yourself at upcoming ASCE events.