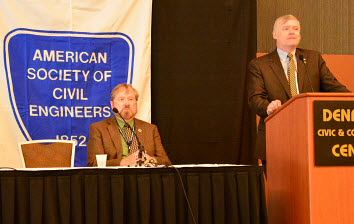 On March 15, the National Snow and Ice Data Center announced that the Arctic had reached the end of the freezing season and begun its thaw. The U.S. information and referral center in support of polar and cryospheric research reports that due to climate change, the last 10 years were the 10 lowest maximum extensions of ice in the Arctic region on record—and this past season’s ice cover is significantly lower than any previously recorded in the time period from 1979 to 2000.

Climate change presents a number of significant challenges to communities and to the natural environment. The changing conditions also challenge long-held approaches to infrastructure development, and nowhere is this truer than in the cold regions.

Alaska and Russia both hold trillions of cubic feet of natural gas and oil, and in the past getting this natural resource to market was assumed to require construction of pipelines. Now, the potential opening of new shipping lanes presents another approach to tapping these natural gas and oil reserves, which translates into the design and construction of new harbors and ports.

ASCE’s 10th International Symposium on Cold Regions Development, held June 2-5 in Anchorage, Alaska, provided a framework for civil engineers to exchange information, examine lessons learned, and present new technologies for working in and dealing with harsh and difficult conditions. Organized by ASCE’s Technical Council on Cold Regions Engineering (TCCRE) and the International Association of Cold Regions Development Studies (IACORDS), the symposium’s technical and plenary sessions were a blend of science, research, engineering, and education dealing with all aspects of remote cold climate development, permafrost as a constraint to building, preservation of frozen soil, designs unique to the Arctic, logistics, sustainability, infrastructure design and construction, and project design life in a changing climate.

“The reason why we are all here this week is to celebrate and learn more about cold regions engineering,” said ASCE President Gregory E. DiLoreto, P.E., P.L.S., D.WRE, F.ASCE, in his remarks welcoming the attendees to the opening plenary session. “I am personally thrilled to see the members of TCCRE and other great engineering societies take part in this vital topic on sustainability and changing climate this week.

“The Northwest Passage is opening up more each year and everybody is anticipating that eventually this will be a shipping route,” explained Thomas G. Krzewinski, P.E., D.GE, F.ASCE, president of IACORDS, conference chair, and principal and senior geotechnical engineering consultant with Golder Associates Inc. “Currently, there are no ports for Coast Guard facilities to handle that type of new traffic, and there are only two ports on the Chukchi Sea [off Alaska] and they are both shallow draft ports. One is at Nome, Alaska, and the other is near Red Dog Mine, so the number of ports will have to increase if we are going to use the Northwest Passage and the Bering Sea for ship transport.

“So what I think that attendees learned [at this symposium] is that engineers are actually working on an approach to dealing with climate change in terms of thermally balanced foundation design of structures. We’re not totally there but at least we are starting a process and heading in a direction that we will either provide more redundancy in our designs or will institute sophisticated monitoring systems so that we can see how the things that we build are performing when the ground warms.”

The symposium opened with a plenary session entitled Bridging the Gap between Climate Change Science and Engineering Practice, where Mead Treadwell, the lieutenant governor of Alaska and a former member of the U.S. Arctic Research Commission, talked about Arctic development and the trials and tribulations of opening up the Arctic region for shipping and trade. Ted S. Vinson, Ph.D., P.E., M.ASCE, chair of ASCE’s Committee on Adaptation to a Changing Climate, chair of TCCRE, and professor emeritus at Oregon State University, discussed the gap between climate change science and engineering practice and how it could be bridged. Finally, a group of experts from the U.S., Canada, Russia, Japan, China, and Scandinavia talked about climate change in their individual countries.

There was also a plenary session on the debris challenges of the 2011 Tohoku, Japan, earthquake and tsunami, and current and future energy projects in Alaska.

“The Watana Dam Hydroelectric project on the Susitna River in central Alaska [which was discussed in the Energy in Alaska plenary session] is in its third year of a 5-year design process,” noted Krzewinski. “And when it is completed it could power an entire railbelt of Alaska if it had to, so it is a good example of building for the future and the growth of Alaska,”

“The big three challenges for engineers are probably snow, ice, and permafrost,” explained Jon Zufelt, Ph.D., P.E., M.ASCE, conference proceedings chair and a civil engineer with the U.S. Army Corps of Engineers at the Cold Regions Research and Engineering Laboratory in Anchorage. “So with the trends that we are seeing with climate change and the fact that most of our polar regions both in the northern Arctic and Antarctica seem to be experiencing more rapid thawing, then we as engineers—especially our cold regions engineers—need to know how we should be adapting our designs to take those changes into effect. And this conference really provided an opportunity for information exchange about doing just that.”

“A lot of geotechnical sessions focused on ground engineering and the thermo aspects of designing for frozen ground,” says Krzewinski. “At this conference there were a lot of questions asked by the attendees, a lot of good technical exchanges, and a lot of ‘I need to talk further about this with you because this is something that I am doing,’ so I would say it was a very good and productive conference for the attendees.”

“There have always been engineers working in cold regions,” concluded Zufelt. “But I think with climate change there is going to be an influx of new construction projects and new engineering requirements, codes, and standards. This conference certainly took the lead in talking about that.”