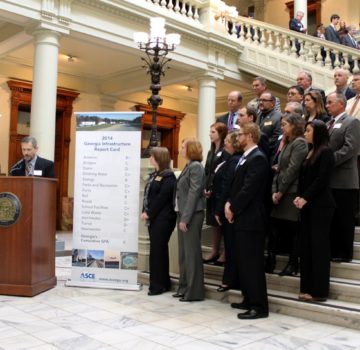 Dan said he incorporated many of the lessons he learned from his previous experience working on the 2009 Georgia Report Card. The key to their effort was to “plan the work and work the plan.”

And the committee’s hard work paid off. Media coverage of the Georgia Report Card release has been very successful. As of January 24, 2014, it’s been covered in 14 media outlets including print, online, TV and radio.  Stories have appeared in the Atlanta Business Chronicle, The Gainesville Times, Access North Georgia, CBS Atlanta, and Georgia Public Broadcasting.

1)    Strategic staffing and planning by the committee are essential. Reflecting their personality strengths, Dan handled the promotion and Rebecca Shelton, his co-chair, managed the Report Card development. Dan is more of an extrovert and feels comfortable speaking in public and dealing with the media. Rebecca is great at managing the development of a written report and the contributors. Planning by a committee of 60 people began a year in advance.

2)    Break the project into manageable chunks with accountability. The committee divided the entire project into a series of tasks with specific deadlines and everyone contributed. The committee regularly discussed what was important and what next steps would be needed.

3)    Take advantage of other resources. The committee talked to members in other ASCE Sections early on to get their best practices advice about the Report Card release. They also worked closely with ASCE’s Government Relations staff to get ideas.

4)    Tie the release into the state lawmakers’ schedule. In Georgia, the legislature met for 40 days last fall. Instead of having a one day splash release, the Report Card committee decided to keep the momentum up for all 40 days. The release on the steps of the Georgia capitol occurred on the first day of the 2014 legislative session.

And finally, while the 2009 Report Card covered 12 sections of infrastructure, the 2014 Report Card added two more sections which became a new angle for promotion.

For more about the Georgia Report Card release, see the related post on our sister blog, Save America’s Infrastructure.  What best practices tips can you add?