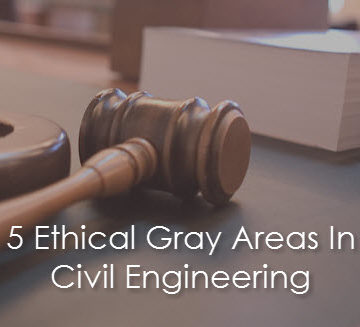 In some cases, right from wrong is not a matter of black and white. Rather the question of what is ethical can present unique answers on a case-by-case basis, creating gray areas.

ASCE’s General Counsel Tara Hoke, in her online series A Question of Ethics, delves into cases of ethics and issues affecting the civil engineering profession as considered by the ASCE Committee on Professional Conduct (CPC). These cases range from ethical lessons learned from major natural disasters to breaches in ethics by individual civil engineers.

1. Negotiating a parting of ways

Severing ties between employer and employee is often a difficult endeavor that can affect the livelihoods of those involved.

To successfully manage a negotiation of a parting of ways, as Canon 4 of ASCE’s Code of Ethics states, acting professionally and avoiding conflicts of interest are something that all engineers should pursue.

2. Misuse of alcohol or controlled substances

In her column, Hoke asks engineers to look at marijuana usage not only from a legality standpoint but to consider whether or not its use is a violation of ethical precepts governing the profession by definition.

“If the use of marijuana, alcohol, or any other substance undermines an engineer’s ability to be truthful and objective, to demonstrate integrity in financial or business decisions, and to honor obligations to safeguard the welfare of the public, then clearly his or her conduct would fall short of the standards set by ASCE’s Code of Ethics,” Hoke writes.

In one 1971 case, ASCE members made campaign contributions to public officials while benefitting from public contracts. The

donors maintained that their donations were a reflection of their “civil duty” to play a role in the election process.

While dismissing most of the accused for a lack of evidence, the CPC turned its attention to the lack of ethical guidance with respect to civil participation by engineering professionals. The CPC responded to the case with a five-point guideline submitted to ASCE’s Board of Direction and was approved in April 1971.

Ultimately, in today’s political landscape, ASCE strongly supports involvement of civil engineers in the legislative and regulatory decision-making processes but, “cautions that engineers must recognize the importance of compliance with their legal and ethical obligations in playing such a role, and must remember that their actions should ‘uphold and enhance the honor, integrity, and dignity of the engineering profession.’”

More than once throughout one’s career the dilemma will arise: Should I give myself the extra hour on the worksheet or use my paid-time-off hours?

It might seem like a harmless decision, but what if you were instructed to inflate hours to overcharge a client?

This was the dilemma one ASCE member faced.

After careful review of the case, the CPC found that it is “an engineer’s obligation to serve his or her client faithfully and to be vigilant in eschewing fraud and dishonesty.” The situation therefore creates a “clear ethical obligation for the engineer in this case to report with strict accuracy the time spent on his client’s project.”

5. Using a P.E. credential on business cards outside of licensed jurisdictions

“The crucial test under ASCE’s Code of Ethics is whether the member’s use of the P.E. designation on the card is in any way misleading,” Hoke writes.

A business card can be viewed as a statement of one’s credentials or as an advertisement for business. There are two circumstances under which use of the card may give rise to an ethics violation. One is whether the business card is misleading in and of itself. The other, and more common circumstance according to Hoke, is where the engineer’s card is distributed.

To avoid misleading others on your credentials, Hoke encourages engineers to review the laws of the states they travel to before distributing their card for personal or professional use.

Read the full catalog of A Question of Ethics articles online at and in Civil Engineering magazine.

ASCE’s website provides a variety of other ethics-related resources, including the Society’s Code of Ethics.