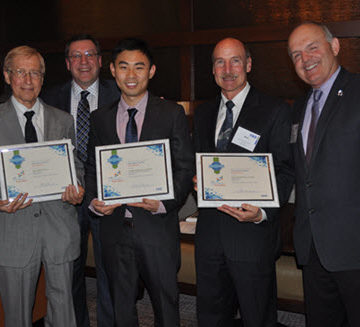 The team behind the Ocean Forest submittal that won the Innovation Contest’s Overall Best New Concept receive their award from Jerry Buckwalter and Terry Neimeyer.

A funny thing happens when innovators get in the same room with other innovators.

They start talking to each other and one innovation turns into three, problems become solutions, and pretty soon many of the world’s ills seem close to being cured.

The ASCE Innovation Contest Green Engineering event, May 17-18, in Reston, VA, went something like that, with three category winners and one overall winner trading notes with each other as they presented their innovative ideas to industry leaders.

“My experience has been that the greatest opportunity for advances in our field is where you have overlapping areas,” said Mohammad “Mo” Ehsani, Ph.D., P.E., F.ASCE, president of QuakeWrap in Tucson, AZ, whose StifPipe submittal was honored with a Best Value award.

“When you bring in people from pipes and soil and transportation, and you bring them together with these innovations, that’s probably when you’re going to find new opportunities and some great ideas.”

The 2016 Innovation Contest was a first for ASCE, part of the Society’s Grand Challenge strategic initiative to seek ways to reduce infrastructure life-cycle costs. The Green Engineering event – sponsored by KCI Technologies – was the first of four events celebrating the category winners. Similar events will follow this summer in Philadelphia, New Jersey, and California.

The Green Engineering event began with a dinner and keynote address from Bill Bertera, the president and CEO of the Institute for Sustainable Infrastructure, an organization co-founded by ASCE that helps administer the Envision rating system.

The next morning, the award winners presented their submittals.

“These winners are a great illustration of emerging technology as well as proven technology and can be used to reduce life-cycle costs of infrastructure, which is our goal,” said KCI Technologies CEO Terry Neimeyer, P.E., F.ASCE. “I think green engineering is something that will help the ASCE Grand Challenge as well as help the planet.”

Making each other’s innovations even better

It did not take the award winners long to make connections. Ehsani, in conversation with fellow honoree Jim Stewart, Ph.D., a physicist working on the Ocean Forest project, discovered a potential mutual benefit. His company’s fiber-reinforced-polymer-based pipe could be a perfect fit for the seaweed forest innovation submitted by the Los Angeles Section Sustainbility Committee. The committee sent Jason Zhang, Stewart and Mark Capron, P.E., M.ASCE, to receive the Overall Best New Concept award for the entire Innovation Contest.

“Their whole team’s innovation was kind of being stymied by the fact that they didn’t have the right pipe. I told him we could do this for literally less than one-tenth than what they were quoted,” Ehsani said. “I had no idea this was a market for the pipe I invented, and he had no idea he could solve his problem at such a low cost.” 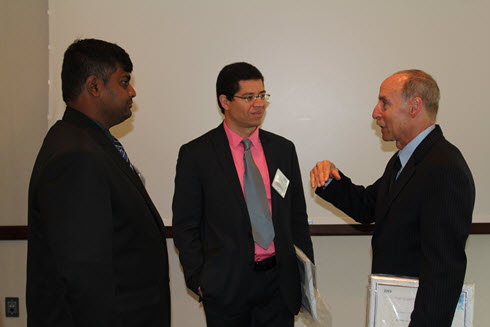 Ehsani’s StifPipe innovation is already in practice, as is the Most Feasible award-winning confined aggregate concrete submittal by Sam Bonasso, P.E., F.ASCE. The Most Innovative award-winning idea to harvest hybrid energy from the thermal energy trapped beneath roadways, submitted by a team of 35 led by Samer Dessouky, D.Eng, P.E., M.ASCE, is still being developed, with huge implications for the future of transportation and green energy

The ocean forests idea might have been the largest in scope – seeking to grow seaweed over 5 percent of the world’s ocean surface in hopes of eliminating the planet’s potential food shortage, solving its atmospheric and ocean carbon dioxide crisis, and replacing total global oil and gas demand.

“It’s just plain essential,” said Capron, who began in 2006 to develop the idea that large-scale digesters using seaweed forests in the ocean could be a game-changer for the planet.

“What kind of world do I want to leave? I have one grandchild and another on the way. This ocean forest thing is not all or nothing. It’s a ‘can’t miss.’ If all the team does is grow all the food the world needs without fresh water, wow.”

The Innovation Contest award was a validation of sorts for the team.

“I’m scared to death of climate change. I thought it was going to be impossible to solve until I met Mark,” said Stewart, who started working on the project seven years ago. “We’re excited by the honor of having been recognized by the civil engineers. To have that recognition gives us hope and leads to new opportunities.”

And the event may have provided tangible help, too, in the form of the other award-winners’ innovations.

“The other contestants here have applications with the ocean forest work,” Capron said. “We can use pipes, the confined gravel, and we can use the piezoelectrics. So, here are some more technologies we can build into the big picture.”