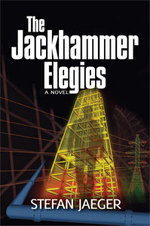 When the bombs went at the American News Corp. building, Scott Carter found himself stranded in an elevator between floors. As the shaft began to fill with smoke, the random assortment of office workers held in the confined car began to panic. Lucky for them, Scott Carter was a structural engineer – the very person who had overseen design of the steel-framed ANC building. Carter coached his compatriots into prying open the elevator doors, clawing through the drywall enclosure, and running to the emergency exit stairs. Reaching safety was only the beginning for Scott, now his sense of duty to society and the profession compelled him to evaluate the safety of the remaining structure.

Stefan Jaeger’s novel, The Jackhammer Elegies, imagines the heroism of a civil engineer placed in extraordinary circumstances. While not the first book elaborate on the engineers’ talents, Jaeger uses his familiarity with civil engineering, gleaned by working for the ASCE, to craft a story with the little nuances that will make real civil engineers nod with understanding. It’s also fun to imagine a fellow engineer as a Jack Bauer-like hero — thwarting terrorists, joining an FBI investigation, and pursuing the girl.

Such a portrayal of civil engineering is also sure to illicit some “yeah right” moments from actual engineer readers. Jaeger goes to lengths describing main character Scott Carter’s second-guessing, but we know it’s never really in doubt that he’ll have the solution. I appreciated the surprisingly realistic description of the industry standard modeling and analysis programs, but I can attest that the super-fast reliable results for a collapse analysis are still fiction. Carter’s schedule is similar to many ASCE members, but it’s amusing to juxtapose the real-world branch meeting experience with the stated importance and intensity of the fictional account. Nevertheless, professionally active engineers will find common cause with Scott Carter and identify with the day-to-day portrayal.

At the heart of The Jackhammer Elegies are opposing views of how civil engineers should interact with the public and promote the profession. Young idealistic engineers are likely to identify with the hero, but even the villainous caricatures are based on prevailing attitudes held by some practicing engineers. There is yet work to be done to cast civil engineering as a profession of technical experts committed to sustainable development and stewardship of the infrastructure that makes modern society possible.  Scott Carter would be the perfect poster boy just as imagined.

While it may not achieve instant classic status, The Jackhammer Elegies is a fun, fast-paced read. Civil engineers will appreciate the concerted effort to speak their language. The general public may be impressed with role civil engineers play in keeping the engine of infrastructure running. Look for The Jackhammer Elegies at Amazon.com or thejackhammerelegies.com. If you’ve read the book, please share your own review below.