Large end-of-year design projects are a mainstay of architecture and engineering curriculum.  It’s for good reason, in the real world you jump from project to project and usually juggle multiple projects at the same time.

As a teacher, it’s rewarding to check back in with students that I taught in their first semesters.  This year I had the opportunity to advise some former students in the final year of their Master of Architecture degree.  Three years ago we covered basic physics and engineering.  I hoped to have given them some foundation in structures that they could use throughout their architecture program.

Three of the very best students in their class were accepted to participate in the multidisciplinary GFRY Studio class.  The funky name is in memory of the Motorola marketing guru famous for coining the RAZR, PEBL, and SLVR.  Each year the studio accepts a design challenge that allows a variety of art students to apply their specialized expertise.  This year’s project was titled COM(M)A, ok – this name is just because architects love crazy names.  The project focused on the reconstruction following the massive Chilean earthquake early this year.  A comma represents pause, and the people of Chile must now pause and evaluate their options for survival post-earthquake.

The course instructors narrowed the project scope to the assistance of one community group in Talca, a moderely size city a couple of hours outside Santiago, Chile.  My former architecture students evaluated the damage caused by the earthquake in the neighborhood.  They researched typical failure modes and evaluated how different material types performed… then they invited me.  I was really impressed and actually learned a lot from them about different techniques for using adobe construction in high seismic zones and the types of wooden structures catching on in the area.  I guess some of my early lessons had stuck with them and been reinforced by their other structures instructors over the years.

Their final contribution to the project will be the construction of a wooden trellis behind the still-standing community center.  This new structure will provide cover for more outdoor activities and provide an example to the community for ways to responsibly construct wooden structures.  The students even plan to travel to Chile and participate in the construction.  Talk about an effective project learning experience.

At the end of the semester I was invited to listen to them present their work in front of architects from Chile.  One of the Chilean architects actually led off the discussion by showing some of the activities that his non-profit organization, Reconstruye, had been leading.  Apparently, a large community concern in the aftermath of the earthquake is that many people will sell their land (below fair value) to the government and relocate to housing projects outside the city center.   Some local activists are concerned that this will tear the successful urban fabric.  The people may stay poorer in their new homes while fewer elite build over the desireable former communities.  Reconstruye has produced a cute video to encourage residents to band together, sustainably redevelop their land, and stay in their communities. 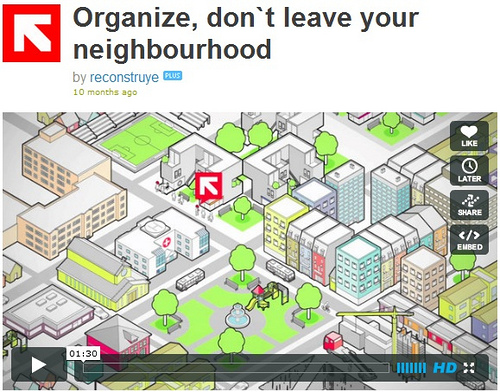 Organize, don`t leave your neighbourhood from reconstruye on Vimeo.

How do you feel about the campaign to keep people in their old communities?  Is that what’s best for the city?  Should the city promote more commercial development of desireable downtown areas?  Please leave a comment.