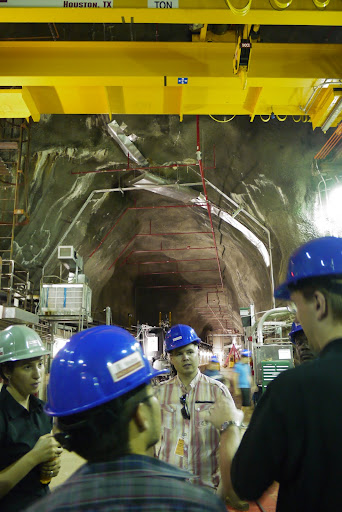 Neutrinos are one of the more intriguing particles produced at Fermilab.  These particles are similar to electrons; however, as their name suggests, neutrinos have no charge.  They also have a very low “interaction probability.”  This means that neutrinos can pass through matter – rock, steel, people – without affecting it.  Unfortunately, scientists can only learn things about neutrinos when they interact with matter, so… what to do?

We were fortunate to receive a guided tour by two of the engineers that help keep the neutrino experiments up and running.  They first explained the safety protocol should any calamity strike while we were deep underground.  The neutrinos aren’t dangerous, but some of the chemicals in the detection devices could make the confined air toxic.  We were then led into a construction hoist that loudly lowered us into the neutrino testing tunnel, about 330 feet below ground.  The descent added an apropos element of adventure to the tour.

The earth shields the experiments from ambient neutrons showered on us by the sun. Neutrons are different from neutrinos, but they also have some unique properties.  Scientists at Fermilab create neutrons that can be used in cancer therapy.  http://en.wikipedia.org/wiki/Fast_neutron_therapy  Although it may sound like futuristic science fiction, the first patients were actually treated in 1976.

Back to the neutrinos… here’s how the experiments work.  Engineers at Fermilab are able to peel off some of the particles from the high energy beam and direct them at a graphite target.  A shower of particles called pions is created.  The pions then decay after some distance into muons and neutrinos.  An absorber composed of aluminum, steel, and concrete captures all remaining particles except the neutrinos (remember they can pass through anything).

Then the neutrinos pass through a detector consisting of alternating steel plates and plastic photon collectors.  About 1 in 10 billion neutrinos will actually contact a particle within the steel plates.  This will cause of very small explosion sending photons into the plastic “scintillator.”  The light is captured and turned into an electronic pulse that can be recorded by computers. 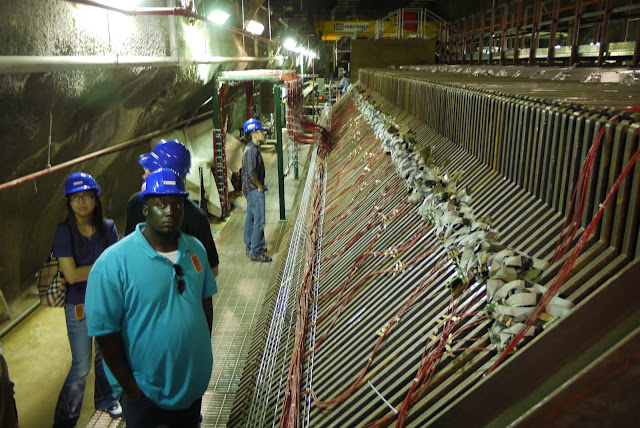 Most of the neutrinos continue right through the testing devices and out the back wall.  Some 730 km downstream another detector has been constructed in a mineshaft in northern Minnesota.  Only a few neutrinos each day make it to the second collector.  Along the way some neutrinos change “flavor” – the physicists’ words not mine. Another interesting outcome is that this change allows scientists to measure the difference in mass of different types of neutrinos.

When the tests started, no one realized that neutrinos had any mass.  This revelation caused a re-write of the Standard Model of particle physics. http://en.wikipedia.org/wiki/Standard_Model   The research performed on neutrinos at Fermilab will help physicists better understand the make-up of the universe.  Physicists admit that we can only see about 75% of the “stuff” out there in the universe.  The stuff we can’t see is called dark matter and neutrinos might account for some of it.

The research being performed at Fermilab on neutrinos, particle collisions, and neutron therapy will greatly expand our understanding of the universe.  The physicists and engineers at Fermilab are like explorers on their way to some undiscovered country.  It’s really cool to think that the frontier of science is just a few miles outside of Chicago.