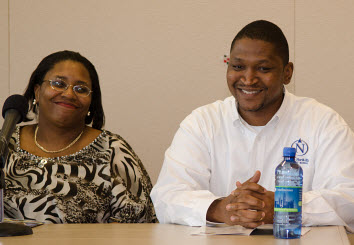 As a sponsor of the 2013 DiscoverE Educator Awards, ASCE recognized teachers who have made an impact on their students’ lives by inspiring them to learn math, science, and engineering. Among the award winners are Nicole Penn, from Kiser Middle School in Greensboro, North Carolina, left, and Anthony Williams, from Omaha North High Magnet School in Omaha, Nebraska, who shared their teaching experiences at an educator panel discussion. National Engineers Week Foundation

The future of the engineering profession received a boost when the National Engineers Week Foundation announced the 3 winners of the 2013 DiscoverE Educator Awards on June 3. Now in its 2nd

year, the program recognizes educators teaching grades 6 through 12 for their effective methods to interest kids in engineering through math and science. ASCE is a sponsor of the award.

The 2013 honorees include Steve Meyer, from Brillion High School in Brillion, Wisconsin; Nicole Penn, from Kiser Middle School in Greensboro, North Carolina; and Anthony Williams, from Omaha North High Magnet School in Omaha, Nebraska. In addition, 8 other top educators from across the country were honored as runners-up.. The 11 educators were selected by a panel of distinguished national education, engineering, and business leaders.

“What makes the DiscoverE Educator Awards unique and what we like celebrating about this program, is that we ask engineers themselves to nominate teachers that they feel are inspiring the next generation of innovators,” explained Thea Sahr, director of Programs for the National Engineers Week Foundation. “As a profession, engineers volunteer to go into the classroom and do outreach projects with the students so they actually know what is happening inside of the schools and what the teachers are doing.

“This award allows us to acknowledge the really amazing work that some of these teachers are doing out there with the support of the engineering community.”

Each of the 3 winners received a $2,000 cash prize, a 3M digital projector, a 3M gift pack of classroom supplies, and a trip to Washington, D.C., where they were honored at a ceremony at the National Museum of the American Indian. The 8 runners-up received $500, a 3M Shoot ‘n Share camera, and a 3M gift pack.

“It was unexpected,” says Williams, who this fall will begin his 6th year teaching at Omaha North High Magnet School. “I did not think that I was going to win [the award] and I was pleasantly surprised when I got the email. It was a pretty cool experience coming out to Washington, D.C. to receive it.

“I am very humbled by the recognition, but glad because the award helps recognize individuals like myself who are trying to make an impact in STEM (science, technology, engineering, and mathematics), particularly at this level of [high school] education where you have a chance to really help mold the next generation of future engineers.”

Says Raheem Jackson, an engineering student now attending Morehouse College, who nominated Williams for the award, “Since our first encounter, Mr. Williams has continuously been a positive influence on my life, both academically and as a mentor guiding me through my life struggles. I owe Mr. Williams for leading me down the path of engineering and inspiring me to pursue a career in industrial engineering.”

A college dropout who eventually returned to the University of Nebraska-Lincoln, where he received his bachelor’s and master’s degrees in industrial and management systems engineering, Williams notes, “Omaha North High Magnet School sits in a pretty impoverished neighborhood. I grew up in this neighborhood and got out of this neighborhood but I decided to come back and try to have an impact to let these kids know that even if you are from this neighborhood you can make it out as well.”

Penn runs a STEM-based after-school club where students in grades 6 through 8 participate in a variety of engineering and technology competitions and activities. She was named 1 of the 3 award winners because, Sahr says, “she understands the critical issue of how hands-on learning really is the gateway to teaching math and science.” Penn also shares her knowledge of STEM hands-on activities with fellow educators at workshops and summer programs.

A technology and engineering teacher in the Brillion School District, Meyer instructs students at the elementary, middle school, high school, and college levels at the new $1.5 million technology and engineering educational center. Sahr says Meyer was a winner of the 2013 award because “he is a big believer in giving kids at every level an opportunity to experiment and explore engineering.” Aside from establishing an engineering curriculum, Meyer brings in speakers, created an internship program, arranges tours of the educational facility, and co-sponsors a STEM club.

“They are all truly amazing,” says Sahr of the 3 winners. “They’re all successfully solving the problem of getting kids interested in engineering.”

Along with ASCE, funding for the DiscoverE Educator Awards program is also provided by the American Society of Mechanical Engineers, the Bechtel Corporation, ExxonMobil, and 3M.

“Steve, Nicole, and Anthony are amazing teachers, but I bet there are civil engineers reading this article who also know an amazing educator,” says Sahr. “Calls for 2014 nominations will be coming out in the late fall/early winter on our website, and we are asking engineers to nominate a teacher in their community that is helping their students discover engineering.”