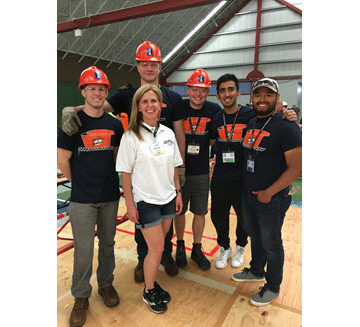 It’s starting to look like a student dynasty of sorts is forming north of the border.

“We can’t believe it,” said Marie-Pier Diotte, S.M.ASCE, team captain for ÉTS. “I can tell you that I shed a tear of pride and happiness for my team.”

Add in the ÉTS 2016 national title in concrete canoe, and it’s quite an impressive run of success for the engineering students at the Montreal university.

“Four years ago, when I started as a member on the steel bridge ÉTS team, we could not have believed that we could compete against the best universities of the United States,” Diotte said. “Remember that we are a small university, French Canadian from Quebec, where only the bachelor’s degree in engineering is taught.

“We are proud of our university, who we are and who we represent. Indeed, it is much more than a sense of pride.”

Forty-three student teams from schools across the world competed in the national steel bridge competition, hosted this year by the Oregon State University School of Civil and Construction Engineering and the OSU ASCE Student Chapter. ASCE and the American Institute of Steel Construction again were cosponsors.

“I had such a great time meeting the students and volunteers at the NSSBC,” Swallow said. “It is incredible to see how 43 teams can come up with 43 different solutions to the same problem. Our future is in great hands with these students as they move into industry and begin to apply their thoughts to solving the challenges our communities face.”

In the end, though, the balanced approach worked for ÉTS.

“Before the awards were announced, we weren’t sure if we did that well,” Diotte said. “The competition was very impressive and tough between the top universities.”

Diotte graduates this summer, but she is confident the team’s legacy of success will continue.

“This year we had a particular challenge in our team: training new members, because so many members of the team are graduating this summer, and continuing the sustainability of our knowledge,” Diotte said. “We spent so many hours per week with each other, so we could think the same way and walk on the right path.”

“After winning two times in a row, we know now that the third time will be even harder than the past competitions,” said team co-captain Nicolas Laflamme, S.M.ASCE. “For this reason, we keep our heads cold and our feet on the ground to be part of the best team next year.”