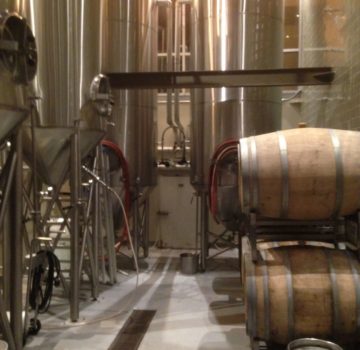 Give a man a beer, waste an hour. Teach a man to brew, and waste a lifetime! (Bill Owen) That’s a little harsh. Beer is one of the oldest prepared beverages and may have been instrumental in the formation of civilization. The desire for grain-based alcohol may have driven humanity to make the time investment in domesticating cereals and sticking in one place to farm them. So if man was brewing beer 10 millennia ago, how hard can it be? I found out on a recent trip to the ThirstyBear Brewing Company in San Francisco.

Our behind-the-scenes brewery tour began in the grain room. The starch in a beer provides the fermentable material. Grains can be malted, which means soaking it in water, allowing germination to begin and then drying the partially germinated grain. Darker malts produce darker beers. Barley is the most commonly used grain. After malting, it is milled to remove the protective hull. Some brewers like to do the milling themselves to keep the grain fresh until it’s ready for the next step.

The grain is then combined with water and heated. This step, called mashing, allows the enzymes found naturally in the barley to break down complex sugars into more simple sugars essential for fermentation. The particular temperature during mashing and the varieties of malt can affect the beer body and alcohol content. Lautering is the process of separating the mash into the clear liquid wort and the residual grain. This step includes recirculating the mix and sometimes trickling water through the grain to extract sugars. Both mashing and lautering steps together require some pretty cool vessels in an industrial setting – a five-gallon pail with spigot and garden hose works for the at-home setup.

Hops are added to the wort in a brewing kettle for the next phase. Beer was flavored with other plants until the sixteenth century, but hops are the preferred ingredient for flavoring beer today. It contributes the bitterness and aromas that differentiate many beers. Brewers are picky about their hop selection. Germany leads the worldwide production. However, American growers in Washington, Oregon, and Idaho are starting to catch up. The plant is vine-like and climbs large trellises – making them the perfect plant for structural engineers. The harvested hop cones are essentially the flowers from the female plants.

The wort and hops are boiled together in a continuous rolling boil lasting between 45 and 90 minutes. Traditional brew kettles are copper because it transfers heat quickly and evenly. At the end of the boil, solid particles are separated out via a whirlpool. The swirling uses centrifugal forces to force the solids out through the bottom where a sieve filters out the solids.

Before fermentation the wort is cooled back down to room temperature. There are basically only four strains of yeast used in most beers:  top-fermenting Saccharomyces cerevisiae, bottom-fermenting Saccharomyces uvarum, Brettanomyces specifically for lambics, and Torulaspora delbrueckii specifically for Bavarian weissbier. Top-fermenting yeasts form foam at the top of the wort and are therefore used in ales. Bottom-fermenting yeast are more common in lagers. The yeast metabolizes the sugars, creating alcohol and carbon dioxide. Fermentation can take one to three weeks and is sometimes repeated with added sugars and yeast, as in Belgian doubles.

Before serving, the beer must still be filtered and matured. Often times the later step is assumed to take place after bottling. A fair amount of flavor can still be attributed to the vessel in which the beer matures. Scotch Ales, for example, derive their unique flavor from maturing in casks formerly used for whiskey production. At this point the beer has been chilled and should remain in a cool environment until its ready for serving. While most beers are more flavorful when served at room temperature, its best that all beers undergo only one heat/cool cycle after maturation. Pro tip: buy your beer from the cooler case since most beers nowadays arrive in chilled trucks. There is something to the old Coors boast about using chilled cars throughout the supply chain. At long last, the last step is to relax and enjoy the highly engineered final product.