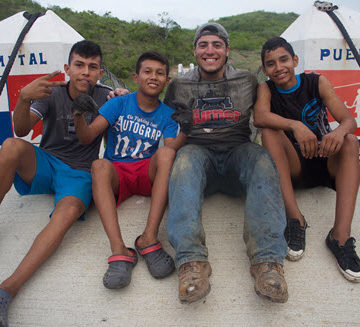 He has to move quickly, given an enormous roster of activities and club memberships –on top of a full architectural engineering course load as a student at Pennsylvania State University.

“I wake up, I’m like, ‘Oh my goodness, where do I start?’ There’s so much stuff to do,” Mezzacappa said. “My energy really comes from people, honestly. I’m an extrovert to an extreme. If I’m working with people, I won’t even need coffee.”

ASCE selected Mezzacappa, S.M.ASCE, as one of the 2016 New Faces of Civil Engineering – College.
He was raised in Staten Island, NY, the son of a general contractor and the grandson of a heating and air-conditioning business owner and builder.

“I grew up on construction sites, visiting my dad and grandfather on projects, wanting to get my hands dirty,” Mezzacappa said. “It’s in my blood. It’s in me. It’s who I am.”

He was in the second grade when the terrorist attacks of 9/11 struck the World Trade Center just 20 miles away. During his freshman year of high school, Mezzacappa became fascinated with the new One World Trade Center, often taking the train and watching the construction.

“I was obsessed. I could stay there for an hour or two at a time,” Mezzacappa said. “There’s a lot of significance behind that project. They’re not just engineering marvels; they’re good examples of what engineering can do to impact society.

“There’s a lot of symbolism there. Between hope and perseverance, I think there is a lot of deeper meaning.”

By the time he arrived on Penn State’s campus, he knew he wanted to study his lifelong love for skyscrapers and architectural engineering but also push the limits of what could be accomplished in a 24-hour day. Concrete Canoe team, Penn State Bridges to Prosperity, Engineers Without Borders USA, Council of Lionhearts, even the Penn State Dance Marathon. And that’s not even half of the list.

“I wanted to get involved in everything,” Mezzacappa laughed.

As president of the Bridges to Prosperity chapter, Mezzacappa oversaw the construction of a 30-meter pedestrian bridge in Panama last year.

“I think a lot of it comes back to I just really love people,” Mezzacappa said. “I love the different cultural aspects of community. I think people are people around the world. There’s so much perspective you can gain through building relationships.

“When I look back at Panama, the most amazing parts were the relationships we built with that community. There’s a deep, emotional connection that we have to this day. That’s when you really change the world. That’s when you can really make projects really meaningful.”

Mezzacappa is looking forward to an internship in Mexico City this summer with Turner Construction Company – his fourth with the company.

He’s also developing his own student organization at Penn State – Passion With Purpose – to help empower others to change the world by following their own passions and talents.

“It’s a challenging world. I don’t think there’s enough encouragement out there to get people doing what they’re passionate about,” Mezzacappa said. “I don’t want to just have a career and make money. I want to be fulfilled. I want to help people.”