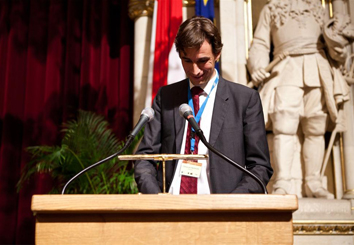 The fifth BIOT Conference on Poromechanics, sponsored by ASCE/EMI, was held in Vienna, Austria, July 10-13. Christian Hellmich, conference chair and director of the Institute for Mechanics of Materials and Structures at the Vienna University of Technology, addresses attendees at the opening of the conference. BIOT-5 Conference

To commemorate the 50th anniversary of Terzaghi’s death, the BIOT-5 Conference on Poromechanics was held in Vienna, Austria, July 10-13, sponsored by ASCE and the Engineering Mechanics Institute. Terzaghi spent 10 years of his career in Vienna.

“Poromechanics is actually rooted in civil engineering,” explained Christian Hellmich, Ph.D., M.ASCE, chair of the conference and director of the Institute for Mechanics of Materials and Structures at the Vienna University of Technology, the conference’s host institution. “After all, civil engineers invented it.”

“When Terzaghi and his associates established soil mechanics,” Hellmich said, “what he was doing was thinking about the foundations of buildings and how it is possible to predict what will happen if water is pressed out of the pores below the foundation of the structure, which is very important in foundation engineering.

“So I would simply define poromechanics as the interaction between a porous medium, such as rocks and soil or man-made materials such as foams or ceramics, interconnecting with a fluid, such as liquid, water, oil, or gas, which leads to phenomena that you would never encounter in fluids or solids alone.”

The conference is named for Maurice Anthony Biot, an engineer who between 1935 and 1962 published a series of scientific papers that laid the foundations of poromechanics, which describes the mechanical behavior of fluid-saturated porous media. In 2002, ASCE’s Board of Direction also instituted the Maurice A. Biot Medal, presented annually to an individual who has made outstanding research contributions to the mechanics of porous materials. Five of the nine previous winners of the medal were in attendance at the conference and were involved in the plenary or breakout sessions.

The Foundation of Civil Engineering

“Civil engineers use poromechanics for soil mechanics and foundation design,” says Amar A. Chaker, Ph.D., M.ASCE, director of the Engineering Mechanics Institute and an opening ceremony speaker at the conference. “If you are designing a really sizeable, important structure, you want to use more advanced [foundation design] theories like those Biot developed.

“The plenary sessions gave attendees a snapshot of four years of progress in poromechanics, in terms of advancing and understanding the phenomenon, getting new capabilities, and understanding that much of the arsenal of existing tools can be applied to a new class of problems, especially the numerical methods, the finite element, and discretization methods,” Chaker said.

“But most important, there was an exchange and interaction among people. Each presentation was followed by three or four minutes of questions, and then you could see people who did not get a chance to ask a question walk up to the author at the end and exchange business cards, so there was quite a bit of networking.”

Hellmich says that poromechanics is not only growing in the more obvious areas of geotechnical engineering, foundations, mining, and tunneling, but in other, unexpected areas as well. A number of advances have taken place since the last BIOT conference four years ago.

“One of the most important new ideas that have come up since the last conference [at Columbia University in New York City] is in the area of atomic molecular physics,” said Hellmich, who is also the chair of ASCE/EMI’s Poromechanics Committee and a member of ASCE/EMI’s Molecular Scale Modeling and Experimentation Committee. “Using poromechanics we are now able to see the behavior of the atoms and how they interact in a whole range of phenomena, so we are just now beginning to understand how to use that application in civil engineering.

“Another new application is in the area of bones and biomechanics. I was the chair of a session at the conference that talked about multiscale poromechanics of geomaterials and biomaterials and how biocompatible materials can be designed so as to mimic biological materials such as bone as closely as possible. Because of their stiffness and strength, [these materials] can be used as bone replacement material.”

“I think attendees came away with the fact that mechanics and in particular poromechanics is the underpinning of 90 percent of civil engineering,” Chaker said. “Whether it is structures or dams, pipes, or bridges or buildings, pavements, slopes, foundation, it is all mechanics.

“The conference was a perfect balance of presenting new, fresh content that is of high value to attendees and then combining that with tours of the historical lab created by Terzaghi and social events in Vienna; it was all really outstanding.”

Hellmich say the BIOT-6 Conference will be held at the École des Ponts Paris Tech in Paris, France, in July 2017.

“We are holding the next conference in honor of Olivier Coussy, the founder of the BIOT Conference and the first winner of the ASCE Biot Medal [2003],” says Hellmich. “He was a prominent scientist and engineer who developed the fundamentals of poromechanics theory; he passed away in 2010 at his home in Vanves, France.”

Proceedings from the BIOT-5 Conference on Poromechanics can be purchased from the ASCE Library.