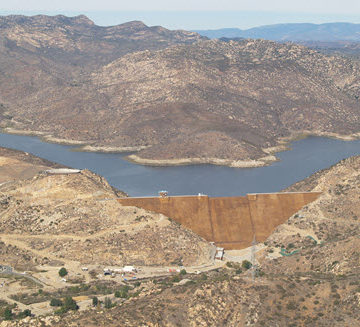 The San Vincente Dam – a key piece of the Emergency and Carryover Storage Project – is the largest dam raise in the world using roller-compacted concrete.

It would be fitting if there were more than one trophy.

After all, the recipient of ASCE’s Outstanding Civil Engineering Achievement Award – the San Diego County Water Authority’s Emergency and Carryover Storage Project – is really several projects in one.

The OCEA Award was announced Thursday night at the 2017 Outstanding Projects and Leaders (OPAL) awards gala at the Renaissance Arlington Capital View Hotel in Arlington, VA.

One of the industry’s most prestigious awards, the OCEA was established in 1960 to honor a project, annually, that best illustrates superior civil engineering ability while making a significant contribution to the profession and society.

Jerry Reed III, P.E., M.ASCE, director of engineering for the San Diego County Water Authority, took the stage in a happy stupor. “Wow, I really didn’t expect to win this with the competition that we had,” he said. “We really appreciate this. We’re proud as a team to give the San Diego region more reliability than they’ve had.”

The Emergency and Carryover Storage Project is the picture of resilience, ensuring safe, reliable drinking water service for 3.2 million residents in a region susceptible to drought and earthquakes.

With more than 80 percent of its water supply coming from hundreds of miles away, the utility designed a complex water conveyance system composed of several large dams, reservoirs, pump stations, pipelines and tunnels to ensure an uninterrupted and ample water supply for at least six months following a hazard event. The $1.5 billion project, begun in 1992 and completed nearly 25 years later, adds 196,000 acre-feet of locally available water storage.

“Anticipating problems and finding solutions is at the heart of a civil engineer’s work,” said ASCE’s 2017 President Norma Jean Mattei, Ph.D., P.E. F.SEI, F.ASCE. “The San Diego Water Authority planned for the future, making an investment that ensures the public’s health, safety, and welfare in case of disaster.”