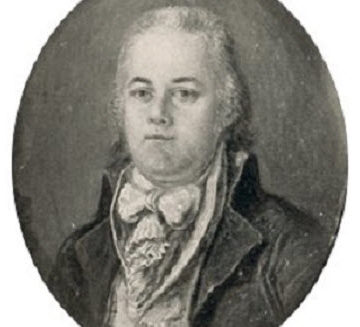 Andrew Ellicott
April marks the anniversary of the setting of astronomer and surveyor Andrew Ellicott’s Stone in Mobile County, AL.

Commissioned by George Washington to denote the border between the United States and the Spanish territory, the Ellicott Stone was set in position April 10, 1799.

In 1795, the Treaty of San Lorenzo el Real (also known as the Pinckney Treaty) set the boundary between America and Spanish territory as the 31-degree line of north latitude. The French, Spanish, and Americans agreed that Ellicott was the person to run the line of demarcation on the ground. Ellicott had worked on the Mason-Dixon Line and the original survey of Washington, DC. It became his duty to go into the wilderness, determine the point at which the U.S. southern border, the Mississippi Territory’s eastern border, and the Spanish possessions northern border met and place a stone marker denoting the exact spot.

In May 1798, Ellicott led a joint United States-Spanish Survey Commission on a two-year project to place monuments along the southern boundary of the nation, as called for by Article 2 of the Pinckney Treaty. He started at the 31-degree north line of latitude at the western end of the Mississippi Territory, which was about 13 miles south of Clarksville on the Mississippi River, near Bayou Tunica. When the line of demarcation was run past St. Stephens, AL, in 1799, Ellicott set up an astronomical observatory on a bluff south of Grog Hall. Working from the bluff 50 feet over the river, Ellicott proceeded to take elevations and sightings to calculate his geographical position. 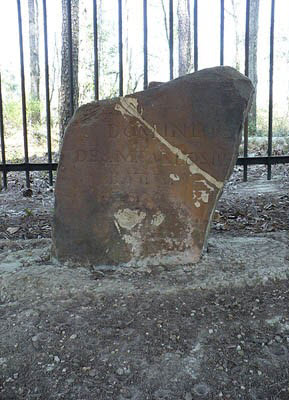 Among the most important of Ellicott’s instruments were his two zenith sector telescopes. Zenith sectors were used to make accurate observations of the position of an object in the sky, such as a star or the sun. The telescope is pivoted on a scale and can move in either direction, following the meridian. This allows the position of an object to be measured relative to the zenith, which is directly overhead. Ellicott’s larger zenith sector has been described as probably the most accurate scientific instrument in America at that time.

Over the course of 21 days, Ellicott made six observations on each of four stars to establish a control point for his compass line that ran east to west, parallel to the 31st degree of north latitude. His observations ended April 9, 1799, and the stone was set in position the next day.

Made of brown ferruginous sandstone, Ellicott’s Stone is approximately two feet high and eight inches thick. On the south (Spanish) side of the stone, the inscription reads “Dominio De S. M. Carlos IV, Lat.31., 1799.” On the north side, the inscription reads “U.S., Lat.31., 1799.” The parallel remained the boundary until America obtained Mobile from the Spaniards 14 years later in 1813.

Ellicott’s Stone is the initial point for all United States public land surveys in the southern region of Alabama and Mississippi, and it is the point of intersection of what is known today as the St. Stephens meridian and the St. Stephens baseline. The U.S. Deputy Land Surveyors used Ellicott’s Stone until 1813 to lay out the townships and ranges north of the 31st parallel.

The historic stone marker is the only known stone monument set by Ellicott during the survey of the 31st Parallel. With the exception of this stone, the other monuments along the boundary were mounds of dirt constructed by the joint survey crews. The mound line, known as Ellicott’s Line, is marked by mounds about four feet tall about every mile. The line was resurveyed in 1854 and a map of the mounds was created. Over the years, farming, logging operations, and erosion has taken a toll on the line. Wooded areas grew up, landscapes changed, and mounds have disappeared. Ellicott’s stone has received damage over the years. One corner of the stone was accidently broken off, reportedly by a logger working in the area, and there are various chips caused by gunshots. In 1917, a parcel of land around it was deeded to the City of Mobile to preserve this important historical marker.

Ellicott’s Stone was dedicated as an ASCE National Historic Civil Engineering Landmark in 1968.