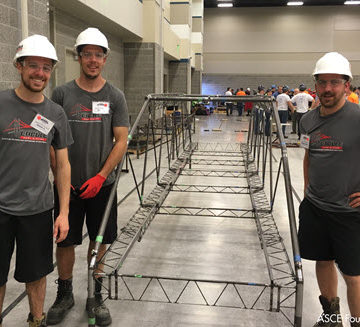 The ETS steel bridge team took first place in the national competition for the first time in school history.

The champions of the 25th annual National Student Steel Bridge Competition are from a school winning it for the first time — École de technologie supérieure of Montreal, Québec, Canada.

From across the world, 48 student teams converged on the campus of Brigham Young University in Provo, UT, May 27-28. In addition to continental U.S. universities represented, teams from Puerto Rico, Mexico, Canada, and from Tongji University in Shanghai, China, took part.

ASCE and the American Institute of Steel Construction cosponsor the event each year.

The finals represent the culmination of a school year’s work by each team, developing and refining their bridge designs and construction methods. The competitio 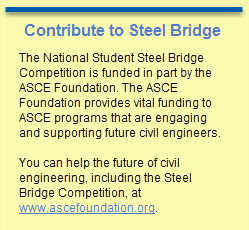 n rates each team and its bridge in construction speed, bridge lightness, display, stiffness, economy, and efficiency – all feeding into an overall winner.

“ETS had a wonderful bridge,” said Frank Hatfield, Ph.D., P.E., M.ASCE, chair of the rules committee. “The difference in the top couple places was pretty small.”

While ETS did not place first in any individual category, the team and its bridge were strong enough across the board to capture the overall championship.

This year’s rules reduced the cost of steel by half.

“That produced bridges that were heavier,” Hatfield said. “They looked sturdier and they behaved very nicely. I was very happy to see that.”

The enthusiasm of sponsors and teams for the event was captured by their social media posts to Facebook and to Twitter at #NSSBC.