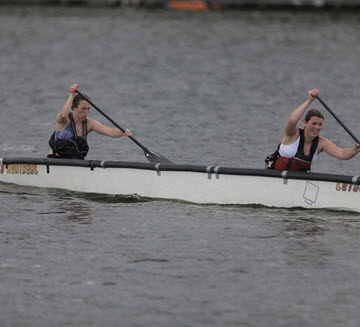 From the drumbeats to the chants to the cheers, École de technologie supérieure was the loudest team all weekend at the ASCE 2016 National Concrete Canoe Competition. It turns out they also were the best.

ÉTS’ Lego-themed canoe, named LETSGO, won first place at the 2016 NCCC, hosted by the University of Texas at Tyler.

The announcement at Saturday’s awards banquet, June 11, came with – appropriately enough – an eruption of song and dance from the ÉTS team.

“Something very important that we try to do is have fun as we perform,” said Jordan Ouellet, team captain and technical director.

The Canadian university, based in Montreal, Québec, has finished in the Top 5 at Nationals in six of the last nine years, including a first-place finish in 2013. Three current team members were a part of that championship, among them this year’s construction director Julian Simard. He was brushing away tears in the afterglow of the first-place announcement Saturday night. 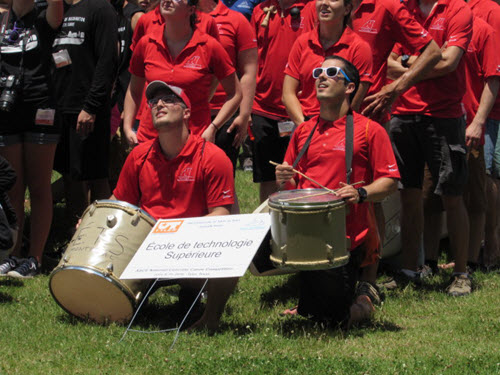 The ETS team traveled everywhere behind a pair of drums throughout the NCCC.

“I’m just really proud of my team,” he said.

McNeese State University earned the Spirit of the Competition Award.

“We had full nights working on it with no sleep,” Jones said. “On top of going to school and everything else. But everything was worth it.”

And what about the drums?

Every time ÉTS moved its canoe through Display Day, whether it was for the swamp test or simply team photos, a makeshift parade formed, led by the team’s marching drummers and group songs.

“I bought them at the thrift store for $10 three years ago,” Ouellet said, interrupted quickly by a smiling, nodding Simard: “A little obnoxious, but fun.” 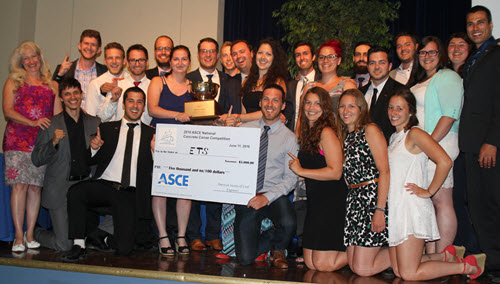 It was the second NCCC title for ETS in four years.

It seemed to make an impression on the other teams and the judges.

“What stuck out the most to me was, not only did they have a very quality product and work extremely hard on their design paper and presentation, but it was their excitement and their dedication – you could see it on their faces,” said Claude Goguen, P.E., M.ASCE, one of the five competition judges. “The way they acted this weekend, you could tell they really wanted it. I’m very happy for them.” 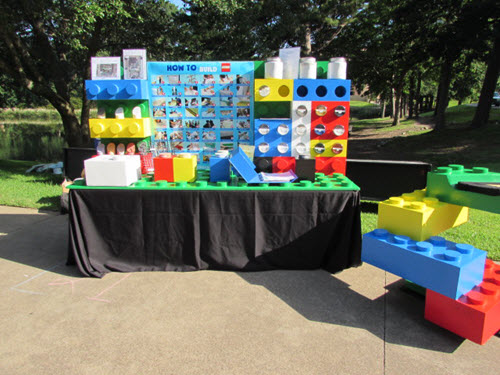 ÉTS avoided disaster in the co-ed sprint finals race, Saturday. The canoe had capsized during the spring regionals, causing a couple of cracks. During the final race at Nationals, those cracks showed up again and water began filling the boat so much that team member Annabelle Boinet put down her oar and began pitching water out the side.

“The more water in the canoe, it gets really, really unstable,” Jones said. “We were just hoping they would finish without sinking.”

Which they did. And in the end, it was just another moment of team togetherness in a weekend full of them.

“Before becoming a team, we were a family,” Ouellet said.