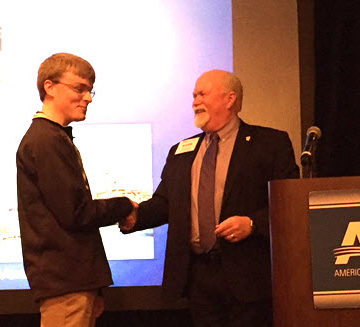 Onstage, Nathan Shellhamer was smiling, but truth be told, he wasn’t totally sure what he was doing there.

Then Woodson announced his name as a winner.

“I just couldn’t believe this was happening,” said Shellhamer, S.M.ASCE, a junior at Purdue University who was attending the MRLC with his Student Chapter. “It’s kind of one of those surreal moments. You don’t think it’s reality.”

The contest gathered civil engineering dreams from ASCE members all around the world in honor of Dream Big: Engineering Wonders of the World, the forthcoming ASCE giant-screen movie, produced by MacGillivray Freeman Films with Bechtel Corporation as a presenting sponsor.

Shellhamer won a trip for two to an international location shoot for the filming of Dream Big.

Shellhamer’s trip will take him to either Dubai, Rome, or Venice, depending on the film’s shooting schedule. He’s thrilled with any destination.

“I’m really excited because I’ve never been to any of the places,” said Shellhamer, who traveled to Germany as a high school student and went to Colombia last fall as a member of the Purdue marching band. “I’ve got a few stamps in my passport. Looking forward to getting a few more.”

While Shellhamer will be leaving the upper Midwest for points overseas, the other Dream Big winners – Alvarez and Rodriguez – started abroad before moving to the United States.

Rocio Rodriguez is a professional engineer for Siemens in Orlando, FL.

Rodriguez grew up in a little town in the mountains of Costa Rica. She came to America for graduate studies at the University of Kansas.

“No beaches anywhere,” she laughed. “It was a big shock. But it was very exciting. I got to meet people from all over the world.”

When she started in civil engineering, she never imagined she would have the job she does now at Siemens – working to design wind-energy towers. Most recently she has been working on a super-slender concrete tower that is 115 meters tall with only a 7-meter base.

“It has been a very, very exciting position,” Rodriguez said. “It’s my dream job.”

Rodriguez wasn’t on stage with Shellhamer to learn of her Dream Big Contest prize, but she was overjoyed after being informed by ASCE via a phone call.

“For three days I was jumping up and down,” Rodriguez said. “I have never been to a studio or met a director.”

Alvarez followed her father into engineering, but unlike him, she wanted to start her own business. While still in her twenties she did just that, and YCE Engineering & Surveying continues to thrive years later, with seven employees and a long list of successful projects.

“It was always my plan,” said Alvarez, who added an MBA to her P.E. license to help with the business aspects of her dream. “There were some bumps in the road, learning experiences. Engineering has helped me in my life. It’s something I’ve wanted to do since I was little.”

Alvarez often packs up her surveying plans and gear and visits local schools and community events to promote the profession to students. She sees Dream Big as a great means of outreach on an even larger scale.

“I think the film is something we need out there so people know what engineers do,” Alvarez said. “And I think this premiere will be really cool. I’m really looking forward to it.”

Shellhamer is just getting started with his career, but he already has big dreams as a transportation engineer.

“I want to get out there and make a difference,” he said. “As engineers we have this unique opportunity to take what we’ve learned and apply it, and see it affect a large group of people.

“That’s really big. Without engineers, where would we be?”

Shellhamer said he’s watched the Dream Big trailer three or four times, now with new anticipation both for the film and his trip.

“I think it’ll be interesting from a student perspective,” Shellhamer said. “You hear about these things in class, these big projects. So to get to go there and actually see them – and then on top of that to see how they’re filmed for the movie – to be a part of it and kind of see it firsthand, it’s going to be awesome.”